The network of recording birds in Scotland (called the Local Recorders’ Network) was established by the SOC in 1968. The Club acts as the umbrella organisation for ornithological recording in Scotland, and in several areas this is in conjunction with the local SOC branch, or a local bird club. For example in Shetland, Argyll and Fife, the Shetland, Argyll and Fife Bird Clubs act as co-ordinators, appoint a Local Recorder and submit a bird report for the recording area. On Fair Isle and the Isle of May, this role is carried out by the bird observatories.

Select a recording area from the images below to find out more about the region you're interested in, including for contact details of the local recorder as well as for information on the region's bird report, where available.

More about the Recorders' Network...

The Local Recorders’ database is an extremely valuable archive of local bird information and has numerous uses. Primarily, the database is the main source of information for producing the local bird report, a detailed record of the area’s birdlife – critical for future conservation. It is also used to answer queries relating to individual species or localities, concerning planning applications, conservation issues, or the analysis of population trends.

The SOC is committed to sharing biodiversity data

We share biodiversity data to aid conservation by making the bird records available on the National Biodiversity Network Gateway (NBN Gateway). The NBN Gateway enables conservationists, planners, and developers to find out what biodiversity interests are present in a given area, and it is one of the first points of reference in informed conservation planning.

Through the BirdTrack partnership, you can now view and analyse your own bird records online. The local and national results are on the website for everyone to look at, and with your permission, all of your birdwatching records will automatically be forwarded to the relevant local recorder, which greatly increases the efficiency of entering, exchanging and using the records. Previously difficult areas such as giving grid references for record locations can now be done at the click of a button.

Other features include a search facility for place names and post codes, together with the ability to centre the map at a specified grid reference, or to read the coordinates of the current location. 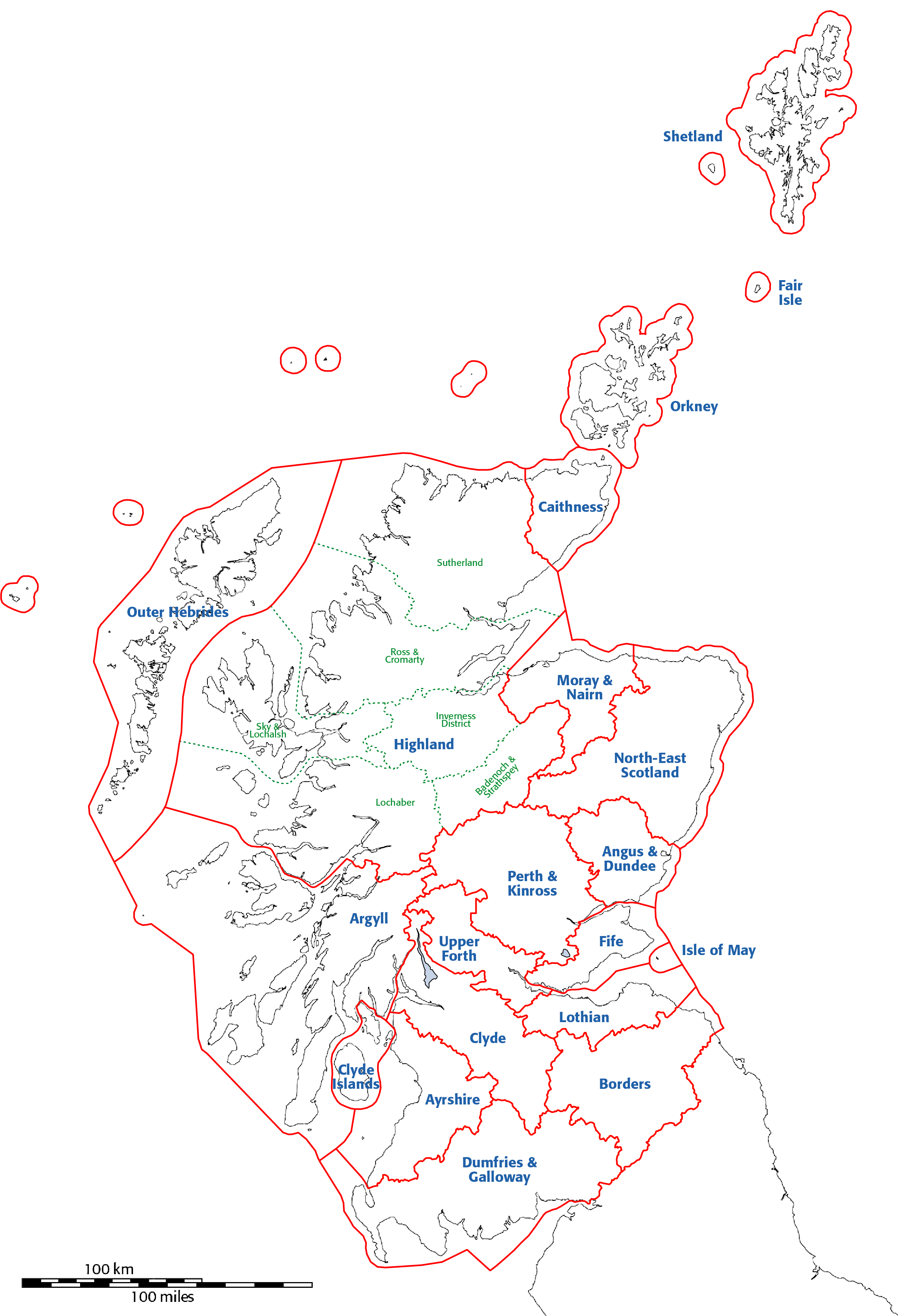 The Local Recorders’ Network – some FAQ’s

What is a Local Recorder?

The Local Recorder (or SOC or county bird recorder, or simply ‘bird recorder’) is typically a volunteer who is responsible for collating all of the individual records of birds that birdwatchers submit to her/him for their recording area.

The Local Recorder enters the records into some form of database, answers queries and acts as the point-of-contact between observers, biological records centres, and the various rarities committees.

In some cases the recorder, along with a team of report editors, is also responsible for the production of a local annual bird report.

What happens to the records and what are they used for?

As mentioned above, the Local Recorder’s database is a vital source of impartial information about our wild birds.

What happened before the Local Recorders’ Network?

The Local Recorders’ Network was established by the SOC in 1968 to support the newly published Scottish Bird Report (an annual review of all 22 recording areas in the country).Before that, significant Scottish records were collated nationally and published in the Scottish Naturalist (1871-1957) and then Scottish Birds (1958-1967). Scotland’s bird observatories also have a long history of bird recording, and local bird clubs published records, but such clubs were scarce.

Before 1968, the records were located according to Scotland’s ‘faunal regions’ (essentially drainage basins) rather than the Vice-County system that was (and still is) used to map the distribution of other animals, invertebrates and plants.

What areas do the Local Recorders cover?

Who can send in records?

The Local Recorders welcome records from all birdwatchers – amateur or professional, beginner or experienced, local or visitor. Don’t be put off; all records are potentially valuable. Uploading your bird records on BirdTrack will automatically send them to the Local Recorder, with your permission.

What sort of records should be sent in?

Local Recorders are interested in receiving many categories of bird sightings within their areas. For example:

In addition to the basic data, it is often of great interest to include general comments relating to some of the records (e.g. that is was a record count, the best/poor year for a particular species).

Bear in mind that over the years, the records that have proved most useful are those that allow comparison between years, that document the importance of local bird populations and that can potentially be used to reveal population changes.

Please send records to the Local Recorder even if they have previously been phoned into Birdline Scotland.

When should the records be sent in?

In order that the annual analysis of records can take place promptly, all records should be submitted by the end of January of the following year. Some Recorders also welcome periodic submission of records during the year in order to spread the load of data entry, but if you use BirdTrack, you can submit records any time you like.

What format should the submission take?

BirdTrack records are automatically formatted for you, and are forwarded to the Local Recorder in a standard format.

If submitting directly to the recorder, check the recorders page or a copy of the local bird report for advice. You may like to consider using the Excel spreadsheet method developed for Borders, but equally applicable to other areas (with some modification). Click here for more information.

For most of us, the sight of an unusual or rare species is the spice of birdwatching, and there is nothing more exciting than discovering a rarity oneself. But in order to give an accurate account of the year’s sightings in Local Bird Reports, all records of unusual species should be supported by written details of circumstances and observations sufficient to prove identification. All records published must stand the scrutiny not only of readers today, but also of those who may refer to these reports in the future. With these aims, Scotland now has a three-tier system of adjudication on records – the British Birds Rarities Committee (BBRC) being responsible for British rarities, the Scottish Birds Records Committee (SBRC) for Scottish rare birds and local committees for lesser rarities and local rarities. Details of the species that each local records committee considers are listed under the Local Recorder/Bird Report page for each region. A suggested format for a rarities submission is also given.

Where should I send records of rarities?

The preferred route for submitting descriptions of rarities is to send them to the Local Recorder who will then forward them to the relevant Records Committee. Subsequent decisions are then returned along the same route.

Where should I send records of rare breeding species, including the less common raptors?

In the past there was potential for records of rare breeding birds to be lost as the records were often retained by the individual observers. Since its establishment in 1973 the Rare Breeding Birds Panel (RBBP) has became the recognised repository for all such records. The records are kept in confidence, but can be accessed by the sponsoring organisations for official use. Similarly, records of the less common raptors are now kept centrally in the archives of the local Raptor Study Groups.

The important issue is that these records are held somewhere and that they keep their necessary confidentiality. Records can be submitted direct to the body concerned, or channelled via the Local Recorder, if preferred. It should be noted that in the cases mentioned above, only summary data is normally fed back to the Local Recorder.

Should results of the other surveys (eg WeBS, BTA or RSPB) be sent to the Recorder?

Local surveys are often organised by the Local Recorder or local SOC Branch, and hopefully the results will be deposited with the Recorder. However, the only feedback from national surveys is likely to be in the final published summary, unless there is a local arrangement with the organizer (e.g. the BTO Regional Rep or local WeBS organiser . You may decide therefore to send a copy of your own results of such surveys to the Local Recorder for the Scottish archive.

Free access to hundreds of local bird reports at your fingertips

Providing data on the distribution of birds across the UK

SPECIES & SUBSPECIES RECORDED UP TO 20 TIMES