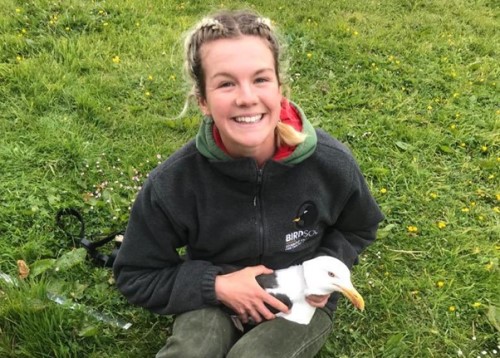 I’ve been fascinated by nature since I was little, which developed into a more academic interest in species diversity indices and modelling populations whilst studying ecology at university. I realised quite quickly that most people on my course had their ‘thing’ within the field of ecology which initially made me feel a bit lost. It was not until I was taken out birding by my friend Sorrel and she found a Yellow-browed Warbler, a completely unknown to me yet exciting species, did I start to notice more, read more and take an acute interest in birds. The photo on the right shows me ringing a Great Black-backed Gull!

The University of Edinburgh has a dedicated ornithological society (or ‘BirdSoc’ as it is affectionately known), which was set up in 2019 by Sorrel Lyall, Gavin Woodbridge and Phoebe Owen. During this past year, BirdSoc has had to operate at a reduced capacity, but has still managed to run a range of field trips, local walks and workshops, including a fascinating birdsong tutorial ‘Birding with your eyes shut’ with Ben Darvill from the BTO. We’re fortunate that in Edinburgh our local sites include Duddingston Loch in Holyrood Park where we regularly enjoy watching wintering Pink-footed Geese, Kestrels and Stonechats. Another favourite site is Musselburgh Lagoons, which boasts Velvet Scoter, Grey Partridge, Slavonian Grebe and Long-tailed Duck to name just a few. I’m delighted to be part of the BirdSoc committee this year and my first contribution has been engaging the society in a monthly Wetland Bird Surveys (WeBS) at Blackford Pond. The surrounding woodland, even in the very heart of Edinburgh, has breeding Dipper, Treecreeper and Grey Wagtail. 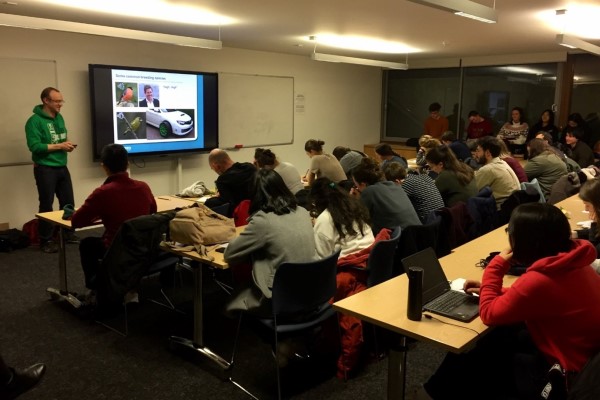 When the first lockdown hit in March, I was forced to wait it out in Bristol with my family. Three weeks stretched into four months and my plans to spend the summer volunteering with the RSPB in Loch Lomond were quickly replaced with daily walks and watching BBC Springwatch with mum. Like most other people, we quickly ended up walking and re-walking the same, rather limited, number of routes around Bristol. Whilst I initially dreaded how dull this might be, we ended up really enjoying the local birds way more than we ever had. It turns out our local species included young Grey Herons, a recurring Nuthatch and nesting House Martins at the train station, which I’d never taken the time to notice before.

As I write this, I am sat in North Ronaldsay Bird Observatory (NRBO) where I have been volunteering since early April. Most of our time out birding is spent doing census where the whole island is divided into six areas, all of which are covered daily and every species and individual is recorded. This huge amount of data gives the Observatory an idea of the population sizes of different species as well as an understanding of the movements of scarcer migrants. Due to its isolated northerly position, North Ronaldsay (‘North Ron’) is one of the best locations in Britain for rare migrants and vagrants. This spring alone has boasted an American Herring Gull, Brunnich’s Guillemot, a Red-rumped Swallow and a Golden Oriole, to name just a few. The thrill of never knowing what might be around the next corner or over the dyke keeps us motivated to stay out birding (even in strong winds and rain) and I felt I’d been duly rewarded finding my first Marsh Warbler and summer plumage Little Gull. 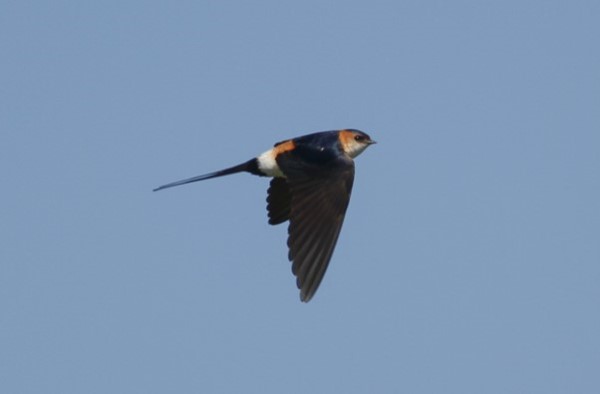 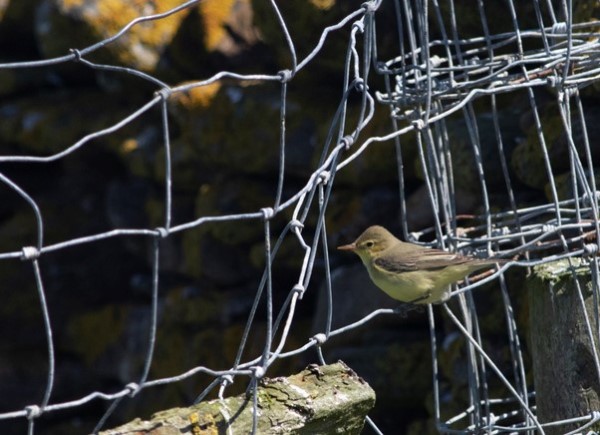 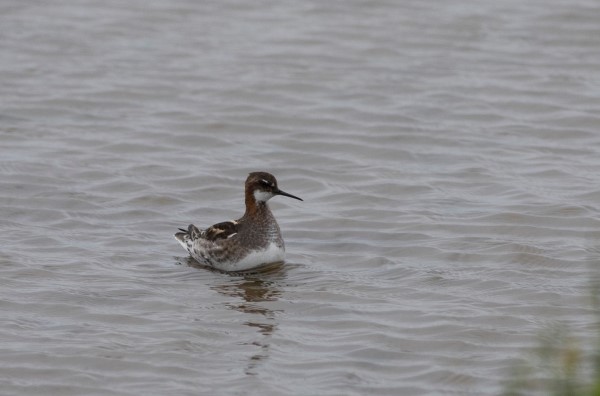 Alongside our daily censuses, NRBO monitors the populations and breeding success of the island’s resident birds and throughout the season we’ve conducted a huge range of species-specific surveys. This has included mapping the island’s breeding Common Gulls on ArcGIS, estimating clutch size and hatching success in the Arctic Tern colonies and full island Black Guillemot counts (reaching an incredible 1057). Since volunteering at NRBO, I’ve also started training for my ringing ‘T’ permit and have loved learning about bird anatomy and handling. Ringing highlights for me definitely include the use of the Gull traps to catch and ring Great Black-backed Gulls and the opportunity to ring a Long-eared Owl - a surprising visitor to North Ron in mid-June.  I must also of course mention the delightful Curlew chicks we have been colour-ringing as part of a long-term conservation project taking place off-island. 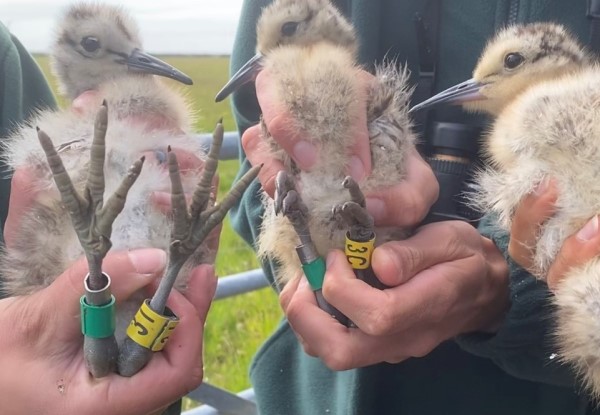 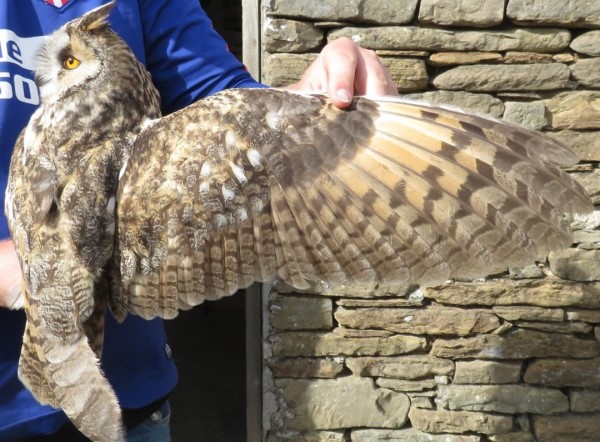 Ringing a Long-eared Owl caught in a mist nets

Alongside census, ringing and general birding, volunteers are fully immersed in all aspects of housekeeping, cooking and upkeep of the observatory. Our volunteering roles are extremely diverse; a single day can include Heligoland trap work, planting vegetables, a shift in the Observatory shop or cooking fish and chips for most of the island! Volunteers are also heavily involved with sheep work. North Ron is home to a rare breed of native, seaweed-eating sheep that lives on the coast, external to the 13 miles of dyke (dry-stone wall) that surrounds the island. In Spring, the ewes are ‘punded’ (an Orcadian term for rounding the sheep up off the beach) in order to lamb in the field. Put simply, this involves any fit and able islanders running after the sheep on the rocky shoreline to enclose them in the ‘punds’ dotted around the coast.

Other than the birding, one of the main things that links BirdSoc and Observatory life together is the wonderful community of like-minded and passionate people. In all honesty, when I arrived on North Ron, I was struggling to distinguish a Linnet from a Twite in the field – it’s been a very steep learning curve and I’m very grateful for everyone’s eternal patience. Whilst finding and twitching rare migrants is undoubtedly thrilling, there’s something almost equally as exciting in unravelling complex bird behaviour and witnessing the successes of breeding pairs. My volunteering experience has altered my perspective on birding as a whole and changed my mind on what I hope to do in the future. I would strongly recommend anyone, especially young birders or relative novices, to try volunteering at an Observatory.