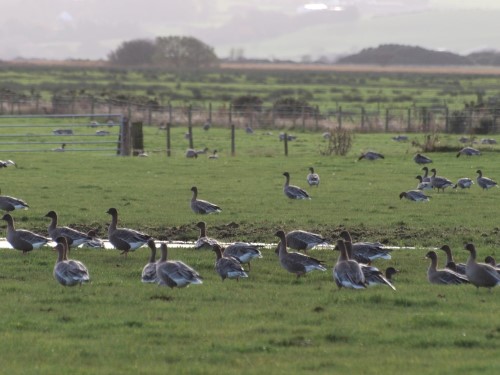 For me, the sound of Pink-footed Goose calls epitomises the changing of seasons. Thousands of geese return to our shores every autumn – their v-shaped skeins a recognisable sight to all. The merest hint of a ‘wink-wink’ call and my head shoots up, scanning the skies for a glimpse of the birds. Of the many species of geese that we have in the UK, I think I speak for many when I say that the Pink-footed is the one that most often captures the heart.

Certainly pinkies are not the most handsome of our geese and we are used to enjoying resident birds such as Greylag and Canada Geese. Small feral populations of both of the latter reside near me and in the summer I can watch the fluffy goslings grow into sleek juveniles, passing through every stage of dishevelled and scruffy in the process. Perhaps, however, this is a point against their favour; the expectation of seeing a species all year round does not compare to the thrill of knowing that a bird has travelled all the way from Iceland or Greenland to be here. 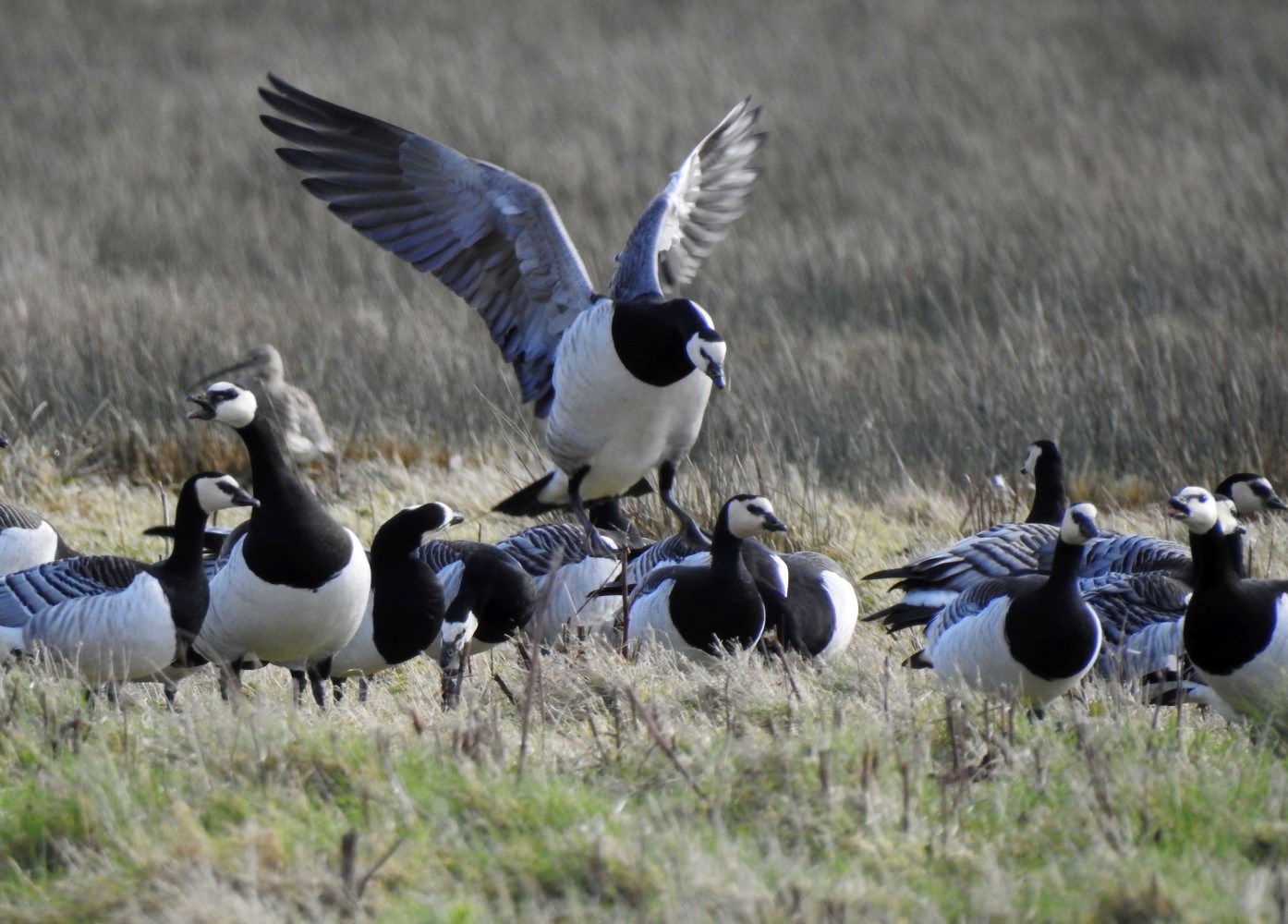 Another wintering species, the Barnacle Goose, with its striking black-and-white plumage, is another favourite of many, although it is less widespread than the pinkfoot. Where I live in the Rhins of Galloway, Barnacle Geese only show up in very small numbers. As such, while each sighting is a surprise and a delight, it cannot evoke quite the same response as the incessant ‘winking’ of pinkies. I am also fortunate enough to live a short drive away from the West Freugh, where a population of Greenland White-fronted Geese overwinter, adding another goose species to my winter list. Hunting down the white-fronts is certainly exciting (especially on the days when I actually see them!) yet it does not compare to seeing the same field heaving with pinkfeet. 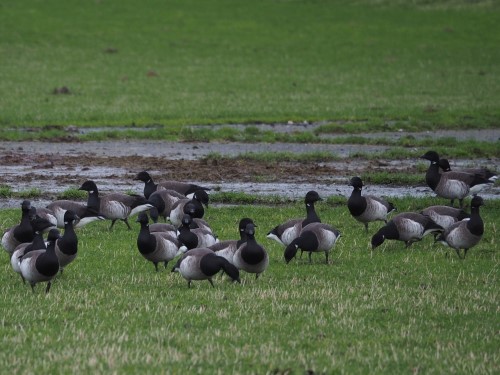 A flock of around 200 pale-bellied Brent Geese also winters on my local patch (I can often watch them from my house!) and I must confess to having a certain fondness for this small goose. V-shaped flocks are not for this disorganised rabble once they’ve arrived here. Their call, too, is nothing to write home about; a guttural ‘cronk’ that is somewhat akin to the combination of a Raven’s call and a Mallard’s quack. Dark geese that have a slightly dirty-looking plumage, the compact size of Brent Geese nonetheless gives them a cutesy appearance. Small in size they may be but certainly not in attitude! I find the brents very entertaining to watch, as they squabble amongst themselves, chasing each other, stretching out their necks and gruffly bickering. However, while brents never fail to bring a smile to my face, seeing hundreds or thousands of pinkies flying overhead fills me with a sense of awe.

My local patch varies from having 2,000 to up to 15,000 Pink-footed Geese present during the winter – a piffling amount compared to the best roosting sites in the UK – and it is perhaps this breath-taking spectacle of sheer numbers that gives this species the edge over the others: With a setting sun to create the mood, the first faint calls of pinkies can be heard. Soon the birds themselves appear in the fading light, first in dribs and drabs and then in their hundreds and thousands, filling the sky before suddenly dropping down in stages, ‘whiffling’, as they finally come to land. 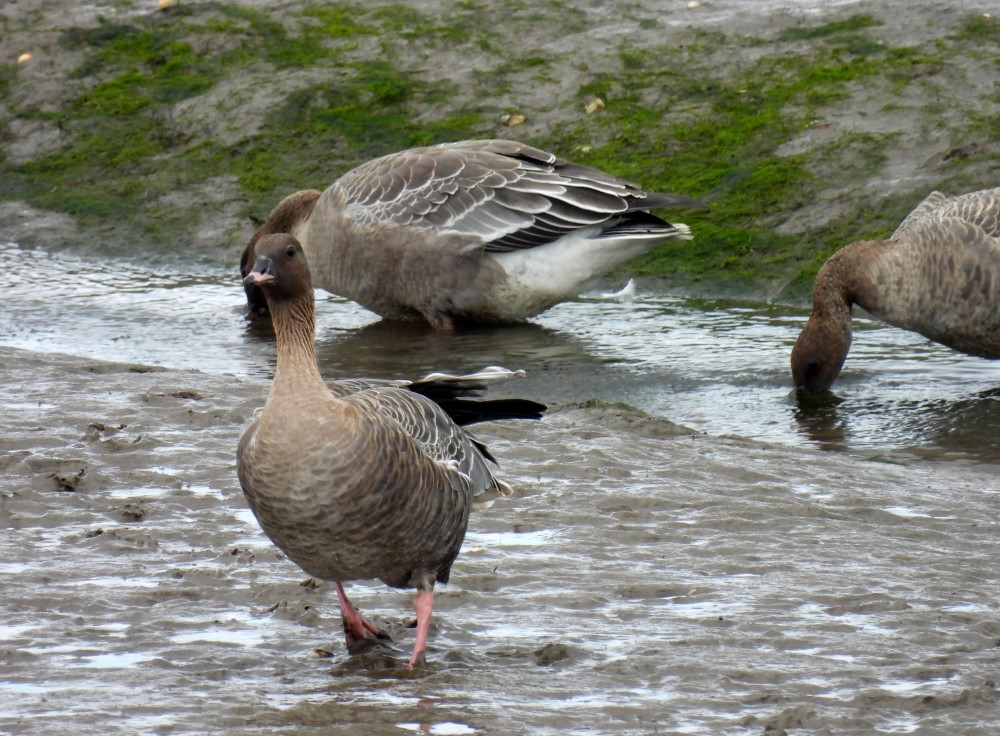 My house seems to lie directly on the local goose highway. I can hear the pinkfeet calling early in the morning as they travel from their roosting site to feeding grounds and then again in the evening as they reverse their route. Just a ten-minute walk up the hill and I can also see the birds – either paddling about on a small freshwater loch or grazing in the surrounding fields. It is great to be able to watch these flocks increase in number over the course of the autumn and then to keep counting them to see how the numbers fluctuate throughout the winter: A decrease in number – ‘where are some of the geese feeding today? Perhaps at that farm a few fields over where there is some nice stubble?’; an increase in number – ‘Oh, hello, where did all of you come from?’.

This sea of buffeting wings and long necks also provides another exciting opportunity; somewhere in the midst of that gaggle, there could be something rarer. A Tundra or Taiga Bean Goose, or perhaps even a Snow Goose. Maybe there will be a colour- ringed individual or a bird with a neckband. What will their story be? And what happens if in the end I reach the outer edges of chocolate-brown necks, grey wings and fleshy-coloured legs and have nothing to show for it except pinkies? Having just spent a considerable amount of time studying each bird individually, it is impossible to feel disappointed – if anything, I now appreciate the Pink-footed Goose even more.