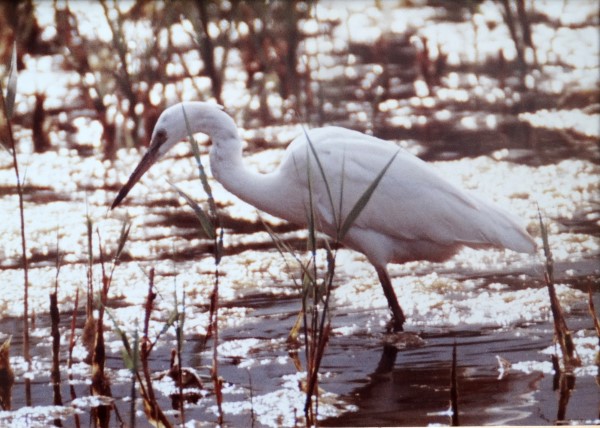 My first day of becoming a serious birdwatcher was 15th July 1977 – when we had a family trip to Tilgate Park near Crawley, West Sussex. It was the start of writing down my observations into a notebook, and the beginning of a journey I am still on. I logged 15 species, with a pair of Jays the highlight. My initial encouragement came from my parents, school friends and the very active bird club at school. I learned a lot from the older birders at school, and particularly I got to hear about rare birds and their trips to see them – they were an active part of the British ‘twitching’ scene, and thus the ‘Grapevine’ of bird news, which got phoned round a vast unseen network of similarly bird-obsessed individuals. I was too much of a novice to be part of that scene – but got second-hand news of good birds seen locally – and that helped set my agenda of persuading my parents of where we might go birding. It was only after an undefined apprenticeship learning the standard birds that you would be taken seriously, and perhaps integrated into the Grapevine. Contrast that to now when bird sightings and information are instantly available to anyone who subscribes to one of the information services or joins their local WhatsApp group. The apprenticeship is no longer part of the process – a shame in many ways.

My parents were advocates of taking holidays in different parts of Britain, and my maternal grandparents lived in Bainsford, Falkirk, so within a few short years I had seen a good range of species, only to be boosted further when I started at Dundee University, and in 1982 made my first autumn trip to the Isles of Scilly. Through all this time there had been birds I was keen to see, and eventually did, but one in particular was proving hard to connect with – Little Egret. It might seem strange now, but back then it was actually still a rare bird – it was a BBRC (British Birds Rarities Committee) assessed species up to the end of 1990, needing a nod of approval from the ’10 Rare Men’ for acceptance. It was still on the SBRC List in the 2000’s – albeit in lower case, allowing for assessment of records by a local records committee where one existed. Not one of the more complicated identifications you would think, but just seeing one was proving a problem for me, but surely it would happen eventually.

In the end, it took me 10 years, almost to the day, to see one in Britain. A family long-weekend trip to Norfolk, to take in the celebrated breeding pair of Black-winged Stilts (and three young) at Holme NOA Reserve, saw us arrive in the car park there and instantly see the star attraction. However, for me the elation was tempered by the all-too-familiar “oh, you should have been here five minutes ago” heralding another dip – there had been a Little Egret in the same lagoon as the Stilts, but it had flown off heading south! Next day saw us heading back to Surrey, but via a favourite birding site for us – Minsmere in Norfolk. Imagine my amazement when on arrival at that car park the news broke that a Little Egret had just dropped into the pool in front of the nearest hide – and so it was on Sunday 19th July 1987 I finally got to see a Little Egret in Britain. About five years later I was on a birding trip along the south coast of England with a mate from Edinburgh. We had stayed overnight near Chichester Harbour, and at dawn the next day were in place to witness a morning flight of 118 Little Egrets coming out of a roost on the east side of the harbour – the dam had truly broken. 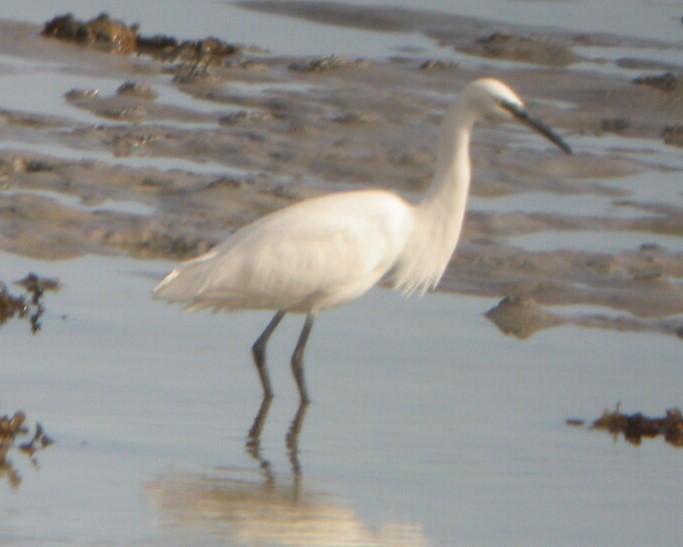 With a switch to a more Scottish focus to my birding in the mid-1990s, my attention turned to filling the more obvious gaps in my Scottish List  and saw me add Little Egret on 6th May 1995, with a lone bird at the River North Esk at Kinnaber, Angus (289 for Scotland). I was still living in Dundee at the time, so not too far to travel, but later that year I moved to Edinburgh, and a whole new perspective, especially when I switched from lab research work to a bird and environmental focussed working life. Just over a week ago (mid-August) there were 10 on the saltmarsh by the car park at Aberlady Bay LNR (the wooden footbridge was the site I ticked my first Greenshank in Britain) near my current weekend workplace at SOC HQ – the species has undergone a remarkable change in status in just a few decades, like many of the European herons. 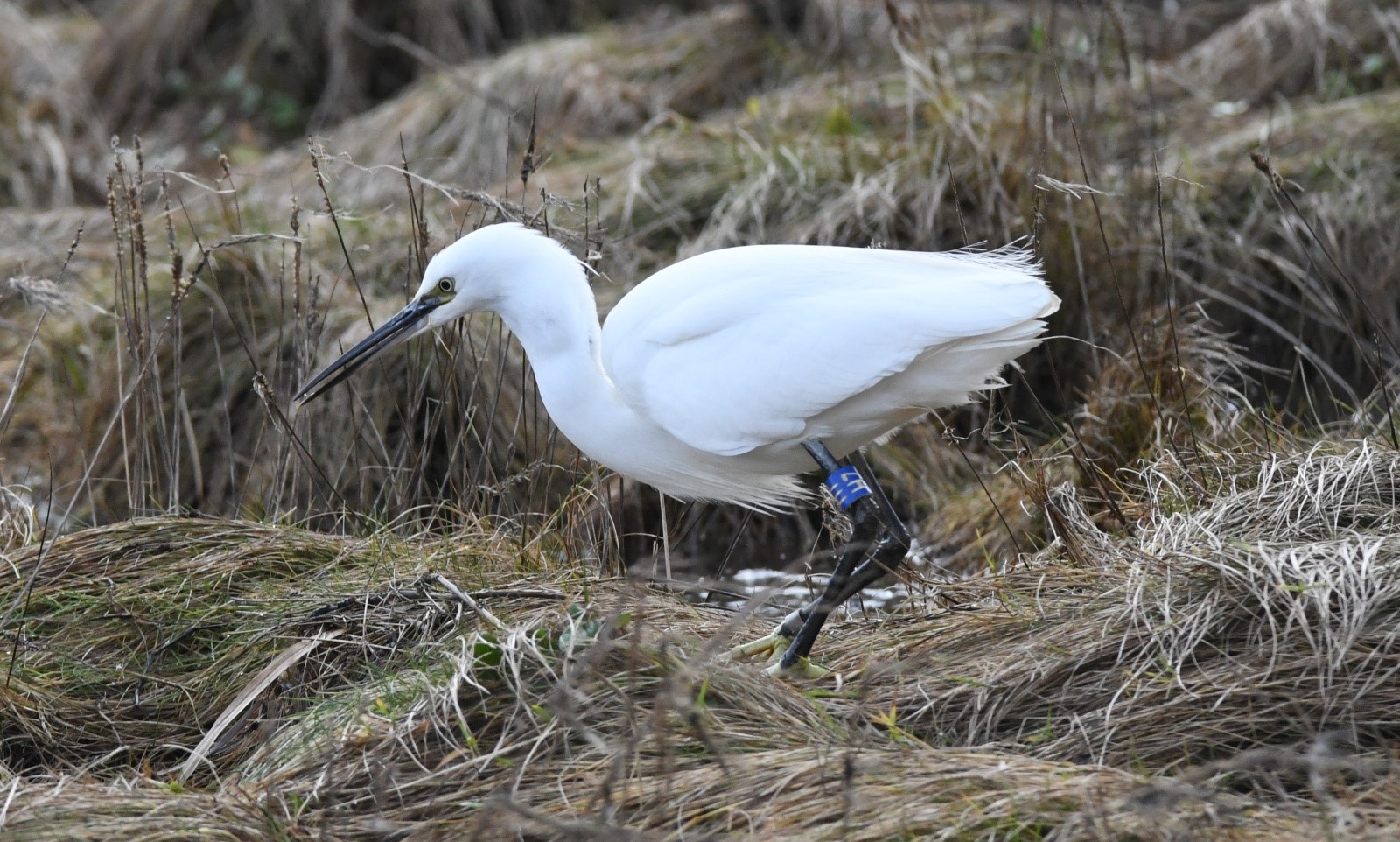 With so many Little Egrets now to be seen – three figure day totals on the Scottish side of the Solway Firth are not unusual – it is easy to take them for granted – but not me, I still enjoy seeing each and every one. It is also not generally apparent where the birds we see might have come from, but the discovery of a colour-ringed Little Egret at Aberlady Bay on Christmas Eve 2019 shed some light on the situation. The colour ring (H7 white on a dark blue Darvic) on its left leg established it had been ringed as a breeding female at Wheldrake Ings, in the Lower Derwent Valley, Yorkshire, on 17th July 2019. It was then seen at Saltholme Pools, Yorkshire, a week later on 25th July, before deciding to spend Christmas and New Year in East Lothian – being seen at Aberlady Bay for a few weeks into 2020 (pic by F.A. Buckley). So next time you see a Little Egret, check its legs – it may have a tale to tell.