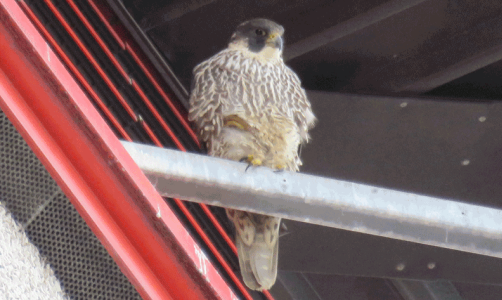 With much of the past year spent in lockdown, confined to our gardens and local green spaces, birding opportunities have been somewhat limited for many of us. However, despite missing out on visits to our favourite reserves and sites, the restrictions have also given us the chance to re-connect with and gain a greater appreciation of the nature on our doorsteps. For those with a sensitive disposition, please note that there are some images of prey items below!

When a female Peregrine Falco peregrinus decided to make my town centre its home in late 2020, it would turn out to be one of the most memorable birding experiences I’ve ever had – I would never take my local patch for granted again.

Once famous for its cotton mills, Johnstone is a small town in Renfrewshire, just 12 miles west of Glasgow city centre, surrounded by the Glennifer Braes to the south and Clyde estuary to the north. After a walk along the Black Cart river that flows through the town one sunny day in late November, I caught a glimpse of what I thought might be a Peregrine flying low above the water. My suspicions were confirmed later that night after seeing a tweet on the new SOC Clyde area Twitter feed (@clydebirding) via Zul Bhatia, Chair of SOC Clyde branch, who reported a sighting of a Peregrine perched on the high flat building in Johnstone town centre.

The following day, I headed out on my daily walk, making a slight detour to my usual route to pay a visit, in the hope of seeing the bird myself. Provost Close, the only high-rise block of its kind in our town, sits right in the heart of Johnstone’s very busy high street. 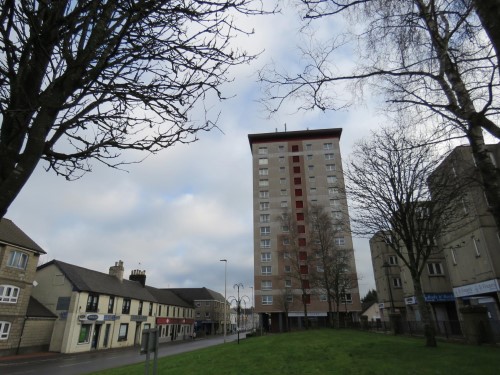 As the building came into view, I looked up and noticed a sudden flurry of pigeons and gulls swirling around the sky in every direction. My eyes were immediately drawn to what looked like a large Jackdaw at the centre of the commotion, as it dropped down from the roof and flew towards me. I grabbed my binoculars and gasped, realising this was the Peregrine. The unmistakable silhouette of the bird against the clear blue sky was so perfect, as it glided overhead, before disappearing out of sight at the far end of the High Street. Such drama in the skies above! The fastest predator on Earth, in my town!

Falcon Girl @Rotatokitten 11 December - I'm never going to get bored reporting sightings of my new friend, PJ the Peregrine, second sighting of the week, in Johnstone High street, perched on top of high flat, eyeing up all the shoppers below, all fluffed up keeping dry out of the rain ❤ @Clydebirding @ZulBhatia

I began making daily visits to the flats and was fortunate on most days to see the bird, which I referred to as ‘PJ’ (an acronym of Peregrine of Johnstone). I began conversing with Zul, who asked if I could take a note of all my sightings and record them for the local group, which I was delighted to assist with.

Standing with a pair of binoculars looking up at a building in a town centre is always going to attract attention and strange looks, but during those first few visits, some residents and shop owners came out to speak to me, sharing stories that they had in fact seen Peregrines on the building for a few years. There were, however, no official recordings ever made of any sightings. Zul explained to me the importance of recording data and the role it plays in conservation to protect threatened species, so I made it my mission to try to ensure that the Johnstone population would be properly monitored.

One of the more gruesome but fascinating things about having a Peregrine in your patch is finding out more about what they are eating, with carcasses, beaks, feathers, and wings regularly strewn all around the base of the flats. Not a welcome daily sight for the residents, but a lottery win for me! Not really having any experience of identifying feathers, Zul put me in touch with a knowledgeable feather expert who also monitors the Peregrines in Dunblane and who agreed to help me with my prey ID via Twitter.

Falcon Girl @Rotatokitten 18 December - Ok, so I haven't seen PJ for 2 days and then today... he seems to have acquired a friend! Two Peregrines! Both sat quite close together on the high flat in Johnstone. What a treat @ZulBhatia @Clydebirding ❤

It was after my online office Christmas party that I had half stumbled down the High Street in the driving sleet for my daily Peregrine watch and was overjoyed to see two birds perched on the flats, some 15ft away from one another. Two Peregrines! My excitement levels reached new highs and I tried hard not to get too carried away with the prospect of this being a breeding pair.

Over the next few months, I was extremely fortunate to watch the birds interact with each other, engaging in small aerial flight displays, carrying in and feeding on prey, or just hanging out together for long snoozes between hunts, keeping out of the worst of the cold winter weather.

L to R:  PJ and Baby, our juvenile male with his brown plumage and vertical streaks on his front. Adult Peregrines have horizontal markings and a white bib.

Despite having a decent pair of binoculars, I still couldn’t get a close enough look to sex the birds. All I knew for certain was that PJ was an adult, given its horizontal markings and white bib, and the newcomer was a juvenile (brown plumage and vertical streaks). Thanks to one of the residents and fellow SOC members with a vastly superior camera and super zoom lens, we were able to film and photograph the two. I later sent the images to Nathalie Mahieu who runs the FAB (Fulham and Barnes) Peregrine project, who was able to identify PJ as an adult female, and the newcomer as a juvenile male, which I decided to refer to as ‘Baby’.

I have been amazed by the hugely welcoming and passionate community of urban Peregrine enthusiasts online, all eager and willing to help share their knowledge and expertise with me. I decided to invest in a better camera too, purchasing a second-hand SX60 Canon Powershot, as recommended by Nathalie. She also suggested I purchase Ed Drewitt’s excellent book, Urban Peregrines, to gain further insight into habits and behaviour.

Falcon Girl @Rotatokitten 1 Feb – PJ out again today, enjoying lunch on the roof, locals oblivious below! There was quite a bit of butchery before she settled on her corner perch. Managed to find two bloodied feathers (ID tbc) @Clydebirding #urbanperegrines #peregrines

1 Feb: In this unforgettable close encounter, I watched PJ fly in with prey (identified later as Starling) and watched her pluck it on a small ledge above the High Street, with bloodied feathers falling around me. This tweet also attracted the attention of the aforementioned author and Peregrine expert, Ed Drewitt, who later contacted me to ask if I would start recording prey items for his research project on the diet of urban Peregrines - there are 125 participating sites in the UK, with Johnstone representing one of the few Scottish locations. 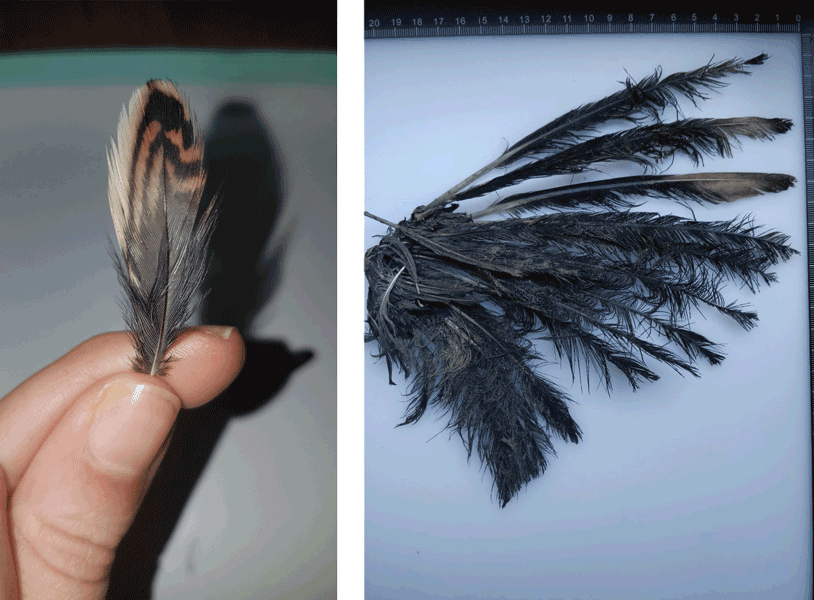 2 Feb - This feather, a Snipe scapular, was an absolute treat of a find, spotted in amongst some Starling and pigeon feathers on the side of a roadside kerb. Finding prey items can sometimes be really challenging. The wind and rain can blow things around for quite some distance, over a large area, including a busy main road, so it can be really easy to miss a tiny feather like this.

Having two birds present on the flats meant even more prey items for me to find and identify. As Feral Pigeon seemed to be our birds’ number one snack of choice, I became confident in being able to identify their feathers and could recognise when I had stumbled upon something more ‘exotic’! I would always try to identify the feathers myself first, using the website featherbase before turning to experts on Twitter.

Luckily, I was able to enlist the help of one of my husband’s friends from our local pub, who is an experienced birder and has been watching the Peregrines for a few years. Having two of us on the case made a big difference as it meant we could go out at different times of the day to build up a more accurate picture of what prey is being brought in and when. 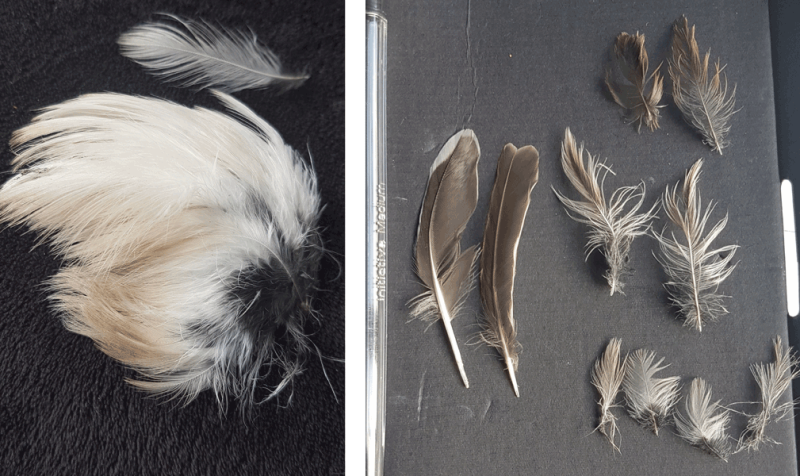 8 Feb - This one was very unusual and sadly, we were unable to get a positive ID on it but Ed Drewitt believes this could be a Guillemot. This item was found after a period of bad weather so it could be possible that the bird was blown off course trying to come back to shore. The feathers are incredibly soft and downy after I dried them off on my radiator.

10 Feb - This is my favourite prey item and had it not been for recent snowfall, I doubt I would have found these feathers as they are so delicate and tiny. They belong to a Skylark, which would have been most likely on the move to lower ground to escape the snowy conditions before our Peregrines intercepted it.

28 Feb Although our top prey items have been Feral Pigeon and Starling, Woodcock also features quite highly on the Johnstone list, particularly during February and March. Having never seen one in the wild before, I was thrilled to find these stunning feathers and entire wing. Not having a huge Woodcock population in our local area, it was also surprising! However, we suspect our Peregrines have been hunting this species at night as it migrates, with the roof of the high flats providing the perfect vantage point to spot them passing overhead.

As well as taking smaller prey like Woodcock and Starling, our pair have also successfully hunted Magpie, Jackdaw, Black-headed and Common Gull, and Woodpigeon – incredible really when you think that they have to carry them up onto the roof, 13 storeys high (approx. 140ft)! 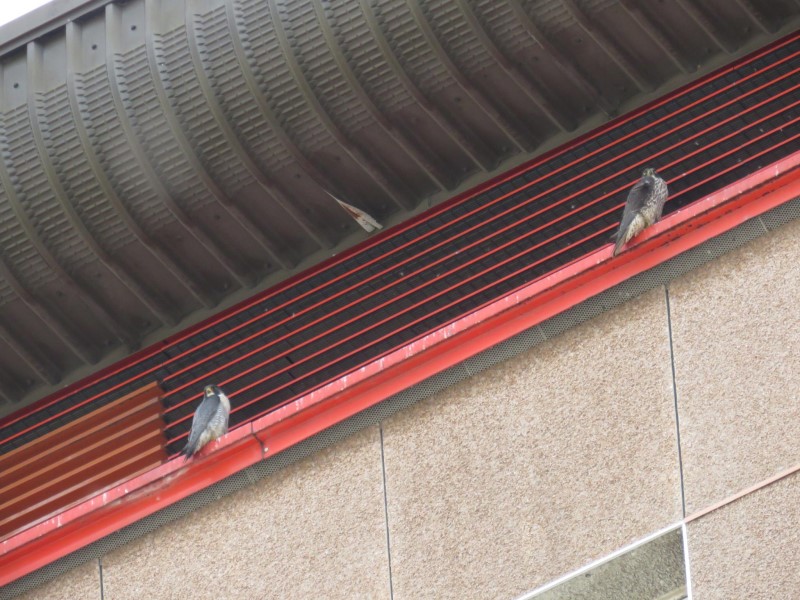 Sticking together – ‘PJ’ and ‘Baby’, end of March 2020. Both have a prominent bulging crop indicating that they have fed recently.

Sightings of PJ and Baby have been intermittent of late, with both birds spending less time roosting and more time out hunting, making the most of the better weather. They are still around however, as we continue to find recent prey items, although we suspect they are using the flats more as a place to cache prey rather than to feed. We had hoped that our pair would mate but suspected that would be a long shot, judging by the slender age of Baby; Peregrines usually mate once they have turned two years old. Both birds, however, were pictured together recently, after a lengthy period of absence, which bodes well for next year. Provost Close really is the perfect Peregrine home – a four-sided cliff with lots of sheltered ledges and wide-open views over the neighbouring countryside with ample hunting opportunities.

The increase in breeding Peregrines in urban sites throughout UK towns and cities continues to be an amazing success story and I feel incredibly lucky to have had the opportunity to experience such close encounters with this truly incredible bird. I will of course be continuing to follow the Johnstone Peregrine’s story as it develops this year and will also be tuning in to the numerous urban Peregrine nest cameras streaming live online.