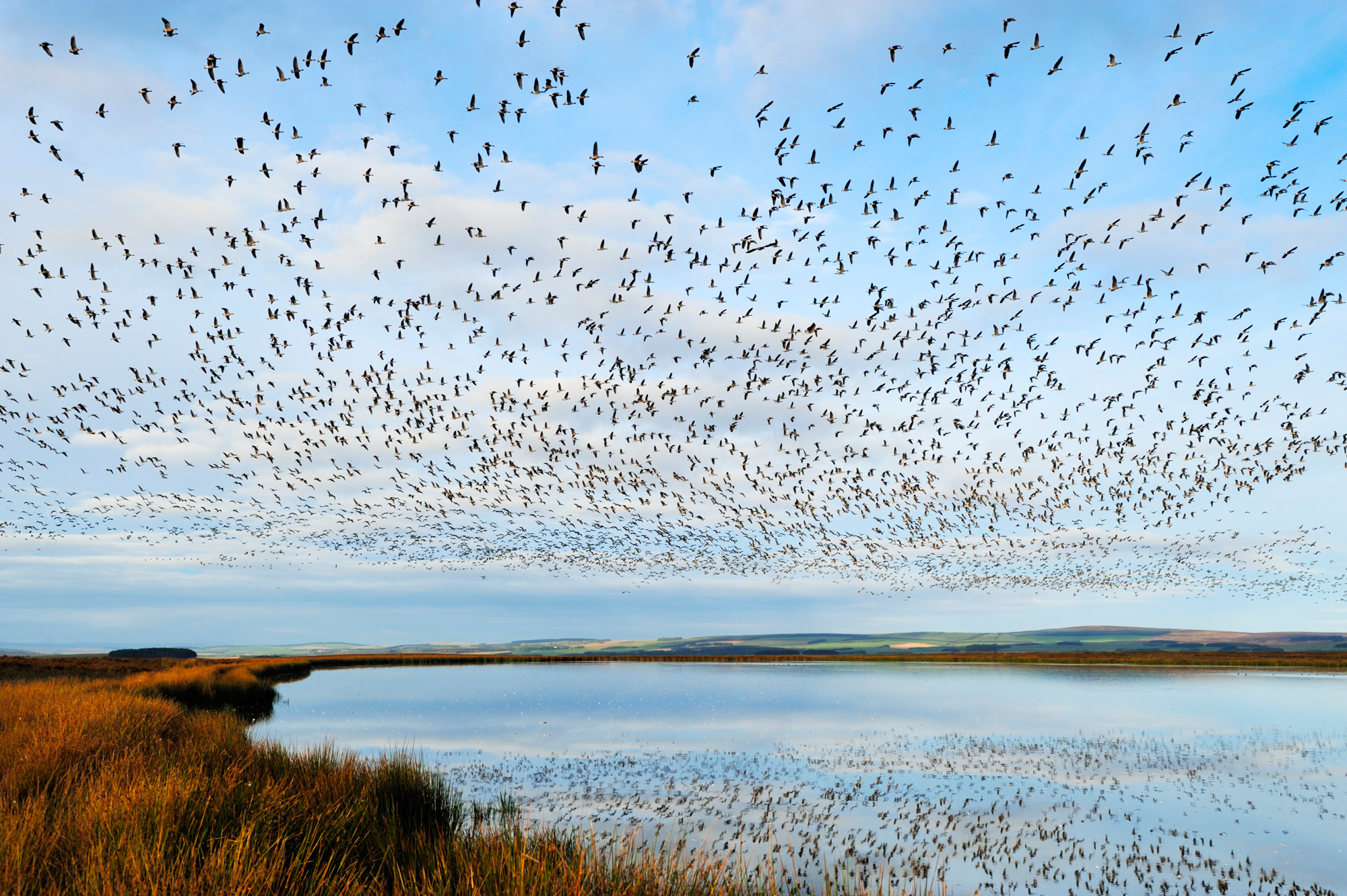 Welcome to spring! The sound of geese (Pink-footed) in the air fades as the birds head north to their breeding grounds in Iceland, Greenland and Northern Scandinavia, making way for the arrival of our summer migrants. Having wintered in warmer climes (Africa and Southern Europe), certain species of birds return to our shores each year to breed; Chiffchaff, Sand Martin and Osprey have been some of the first to arrive back in Scotland this year (view our Spring Migrant Table to find out when and where they touched down), recently followed by the first Wheatears, Swallows and Blackcaps. For the latest migrant arrivals information, sign up to get our email updates. There's also the option to receive some helpful migrant bird ID hints and tips.

Numbers of Meadow Pipit, Pied Wagtail and Skylark have gone up as our overwintering birds have been joined by migrants. This is a good time of year to put your ID skills to the test and look out for White Wagtails – the Continental subspecies of Pied Wagtail. At this point in the season, wader species are beginning to pass through – Ringed Plover and Dunlin are often the first of these.

For our resident birds that do not have to travel to arrive at their breeding grounds, territories are currently being disputed - the woods and hedges are alive with birdsong. Out in the fields, Skylark and Meadow Pipit perform song flights, singing while they fly up into the air before parachuting back down to the ground. At the coast, Rock Pipit execute a similar display. Listen out for Tawny Owl hooting at dusk. Perhaps you may also be lucky enough to hear a Long-eared Owl. Also using sound (although not their voices), the drumming of Great Spotted Woodpecker can be heard as they hammer away against trees (or sometimes just a handy telegraph pole!).

Eider use both audible and visual cues in their courtship displays, tossing their heads up and down and thrusting their chests out, all the while cooing . Other species can be seen performing aerial displays at this time of year – Buzzard and corvids can often be observed soaring and diving through the skies with their partners. When Sparrowhawk display, they tend to fly with exaggerated, slow wingbeats as they rise high into the air before diving down, often sharply veering up again to repeat the process in an undulating flight pattern. Goshawk have a similar display. Although they are much rarer than Sparrowhawk, it is still worth double-checking the bird's identification if you are in an extensive area of woodland.

Perhaps the most obvious sign that species are getting ready for summer is the change in their plumage; many species are losing their plainer, drabber winter coats and moulting into their more showy summer attire. Dunlin, Black-headed Gull, Black Guillemot, Long-tailed Duck, Slavonian Grebe and Red-throated Diver may be mid-moult at this point in the season - some birds have already finished! Most of our wintering species can still be seen at present, so it is a good time to observe them starting to don their summer plumes.

Wintering species that have already packed up and begun to leave for their northern breeding grounds often results in us seeing more of these species because birds wintering locally are being supplemented by a constant stream of passing migrants. Pink-footed and Brent Geese have started to head off, with Redwing and Fieldfare following hot on their heels.

Whether it is summer migrant birds arriving, wintering birds leaving, or our resident species showing off in preparation for the breeding season, this is a wonderful time of year to observe birds.