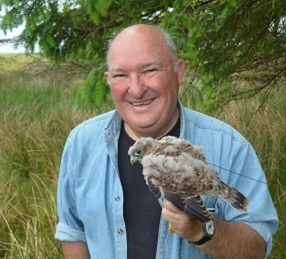 As part of the ongoing work to try and understand why the kestrel has declined so rapidly in Scotland, Gordon Riddle has set up a project to satellite tag six young kestrels with the help of Dave Anderson and Roy Dennis.

Two birds from each of three broods in his main study area on the Ayrshire/Dumfries & Galloway border were tagged in the last week of June just prior to fledging. It is hoped that the information gathered will build on the ringing recovery data collected over the past 40 years from his long term monitoring programme.

One of the six birds, a young male, has been sponsored by the SOC (made possible by a legacy donation from one of our members in combination with support from the Club’s Endowment  Fund) and named ‘George’ after George Waterson, a founding member of the SOC.

All six birds have now fledged and their progress will be reported on Gordon’s website www.riddle-kestrel.com as the data is regularly downloaded. This is probably the first time common kestrels has been satellite tagged in Europe though work has been done in the past on the lesser kestrel’s migration patterns.

Pictured: The tiny 5gram tag (top). Gordon Riddle with ‘George’ after the tag has been fitted.