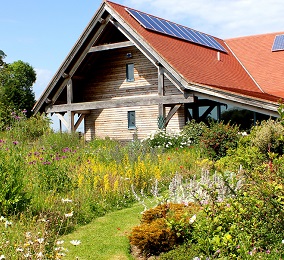 The Club’s previous base for forty years had been at 21 Regent Terrace in central Edinburgh. This was expensive to maintain and was too small for meetings and events so the Trustees decided to find a suitable site for a new, purpose-built HQ that would enable the organisation to better pursue its charitable objectives, including the promotion of an interest in birds and providing a focus for those seeking information about Scotland’s birdlife. Aberlady offered the ideal location, with the nearby local nature reserve providing a major year-round bird watching venue.

The building was designed by Jenny Humphries of Simpson & Brown, and the majority of the materials were donated. The frame was made from Scottish timber from Drumnadrochit, oak and slate came from Aberfoyle, and cement from Dunbar. The splendid frame is held together by oak pegs and is made entirely from Douglas Fir. Superglass, Stirling, donated all the building’s insulation, interestingly made from old car windscreens. While the bulk of capital required for the purchase of the site and the construction came from the sale of 21 Regent Terrace, an appeal to Club members raised over £30,000, which included considerable match funding by the CALA Group. The Club was also grateful for the kindness shown by the Wemyss and March Estates Factor and Lord Wemyss himself, who sold the SOC the plot of land at a favourable price.

The building was named after George Waterston. Edinburgh-born George was the fifth of that name in the direct descent from the George Waterston who in 1752 had founded the venerable firm of printers and stationers. George was expected to join the family firm as a matter of course; indeed, he gave it a whirl for a time, but his heart was elsewhere – birds, and specifically the birds of Fair Isle, halfway between the Orkneys and Shetland. The island became his lifelong passion. George first visited Fair Isle in September 1935, at the age of 24, and returned every summer until the outbreak of war in 1939. By then he had become Honorary Secretary of the SOC, which he had helped to found in 1936. However, nor did the war interfere unduly with his passion; as a lieutenant in the Royal Artillery, he was captured after the fall of Crete in 1941 and it was in a prisoner-of-war camp in Germany that he devised a Business Development Scheme for Fair Isle. Birds in a Cage by Derek Niemann, published in 2012, is a fascinating account of how George and three other POWs formed a birdwatching society among fellow prisoners and even some camp guards. Much of the research for the book was carried out at Waterston House, with the author drawing on the Club’s extensive archive material including George’s diaries and letters.

Indeed, the Club’s library is the largest and most complete collection of ornithological books and journals in Scotland and is continuously updated with new titles from all over the world. It is open to all as a reference facility, with SOC members enjoying the added benefit of being able to borrow books. A children’s corner provides a selection of fun bird books and activity sheets.

The centre attracts around 10,000 visitors each year and has become a favourite spot for bird lovers, art aficionados, book collectors or those just seeking a tranquil and friendly environment to read, have a coffee or enjoy the sights and sounds of nature. Since the building opened, the gallery has hosted over 60 exhibitions including work by many of the country’s leading wildlife artists and photographers.

In addition to the year-round programme of art shows, the venue runs a number of other events including a spring and autumn Optics Demo day, where visitors can try out a wide range of binoculars and telescopes; book launches; illustrated talks; and art and photography demos and workshops. Birdwatching for Beginners courses run throughout the year. These popular courses comprise blocks of four guided walks at key bird watching sites in the county.

As well as events and meetings organised by the SOC, the facility also serves as a regular meeting space for local groups such as the Aberlady Craft Group and Aberlady Bay Advisory Group, and has been hired by many other bird, environmental and art groups and organisations over the years.

The building has also had its fair share of celebrity visitors, with TV presenter and naturalist, Chris Packham swinging by in 2011, after giving a public lecture at the Queen’s Hall to mark the SOC’s 75th anniversary, and more recently a visit from David Lindo, aka the Urban Birder.

Well-known Scottish actors, Douglas Henshall and Bill Paterson were on site in 2013 when the building was hired by STV for the shooting of the TV adaptation of Ann Cleeve’s Shetland-based crime story, ‘Blue Lightening’, where Waterston House doubled up as Fair Isle Bird Observatory.

Out of the limelight, Waterston House serves the local community as an information centre and as a supplier of bird watching resources, such as bird food and feeders, field guides and optical equipment, as well as stocking a selection of bird-themed cards and gifts. A large area of the shop is given over to second hand natural history books, including collectable titles.

It’s not just the building’s interior that continues to attract visitors; the garden has become a much-admired feature of the site, particularly in the summer when the wildflower meadows and borders are awash with colour and buzzing with life. Over 100 species of bird have been recorded from the centre, with around 60 seen within the grounds. The timber structure provides excellent nest sites for visiting Swallows each year, which can be seen hunting for insects over the pond. Regular moth surveys led by John Harrison (East Lothian Council Countryside Ranger Service) have revealed staggering results: in the period May-August last year, over 1500 moths were caught and 139 different species identified, including a first for Scotland – a Large Twin-Spot Carpet. The garden is maintained by a dedicated team of volunteers, who were treated to an impromptu visit earlier this year by yet another well kent face – George Anderson from the BBC’s Beechgrove Gardens.

The building’s anniversary coincides with one of the county’s wildlife spectacles – the arrival of thousands of Pink-footed Geese, which make the long journey from their breeding grounds in Iceland to spend the winter in the UK, with Aberlady Bay a long established pit stop. A programme of SOC Goose Watch events runs from 1st October, in collaboration with East Lothian Council Countryside Ranger Service.