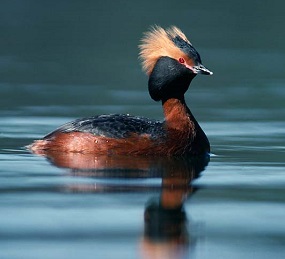 Slavonian Grebes on the Clyde estuary

The status of many birds on the Clyde estuary has changed since the Wetland Bird Survey (WeBS) began as the Birds of Estuaries Enquiry (BoEE) in 1969.  One group of birds which has increased significantly is divers and grebes.  Both Red-throated Diver and Slavonian Grebe now occur in nationally important numbers on the Inner Firth of Clyde (usually referred to as the Clyde estuary, i.e. Renfrew to Wemyss Bay/Coulport).  The recent 5‑year average maximum count of Red-throated Divers is of 195 birds, which is just over 1% of the GB wintering population, and the Clyde is currently estimated to be the fourth most important site for this species in the United Kingdom (BTO/RSPB/JNCC WeBS Report 2012-13).  During the early years of the BoEE, Red-throated Divers wintered on the Clyde only in single figures.  The highest count now recorded was of 343 birds on 7 April 2002, 328 of these off Ardmore Point.

Another species whose fortunes have turned around is Slavonian Grebe.  Prior to 1993, this species was a local rarity, with only a handful showing on the Clyde estuary in any given winter.  However from 1993 onwards numbers steadily increased, with the most recent 5-year average maximum count being of 72 birds.  This amounts to around 7% of the UK winter population, and rates the Clyde estuary as one of the top two sites in the UK for wintering Slavonian Grebes, equalling the winter concentration found between Whiteness and Skelda Ness in the Shetland Islands (ibid).  The highest count yet recorded on the Clyde estuary was of 96 birds on 4 April 2014.

Almost all of the Clyde’s Slavonian Grebes are located in the vicinity of Ardmore Point, on an area of the estuary extending from Cardross Bay to Colgrain on the Helensburgh side.  We only know about the true status of the Clyde for this species thanks to the efforts of the team of WeBS counters who diligently go out in all weathers on a core count date in each month of the year.  In addition, many supplementary counts have been carried out by both WeBS volunteers and other local birdwatchers, most notably Iain Gibson, Sandy Gordon, Sandy McNeil and Alan Wood.  It is only rarely that official WeBs count dates coincide with weather conducive to locating offshore species, especially a bird as small as a Slavonian Grebe.  However, if you can fit in a visit planned to take advantage of calm and clear conditions, armed with a good telescope, the sight of many small flocks, pairs and scattered individual Slavonian Grebes is quite something to behold.  The sight and sound are even more impressive during the month of March into early April, when the grebes have moulted into breeding plumage, and peak numbers of Red-throated Divers on a calm day occasionally burst into orchestrated choruses of communal vocalisation.

To maintain the known conservation status of the Clyde estuary for Slavonian Grebe and Red-throated Diver, it is vital that we obtain at least one relatively complete count each winter.  So far this current winter (to 6 February 2015), the maximum count of Slavonian Grebe achieved has been of 38 off Ardmore Point in November.  Previous peak counts have been mostly during the months of February or March, with most Slavonian Grebes leaving the estuary at the end of the first week in April.  Unfortunately Iain Gibson, who has systematically counted the grebes and divers for many years, is currently incapacitated by a rather serious ankle injury, and it is unlikely he will be walking around Ardmore Point for the remainder of this winter.  We would appeal to SOC members and others to take advantage of a good day between now and early April to attempt to count these two species (and any others of interest, of course).

Admittedly it is not an easy task, but can be very rewarding if your count helps towards recognition of the Clyde as a nationally important site, for Slavonian Grebe in particular.  As well as excellent visibility with little or preferably no wind, another factor favourable to obtaining an optimal count is to do so during the low to mid (rising) tide period.  If this is not possible on a given day due to tidal times, try to do the count around the midday period when the sun is high.  A good telescope with sturdy tripod is essential, as many of the birds can be up to one kilometre offshore (or even further in the case of divers).  The suggested route involves scanning from Cardross Bay (at the station) to start, followed by a clockwise walk around Ardmore Point from the car park at NS324768. Beware – the circular path can be quite muddy in places. The usual best viewing points are from the south path at NS320783, the southern tip of the peninsula at NS315782, the west side at NS313786, and from the northern point looking towards Craigendoran at NS315790.  It’s advisable to scan slowly with a telescope, as a proportion of the birds will be diving at any given time.  However it’s important not to count the same birds twice!  It would also be helpful to count Great Crested Grebes, most of which are usually in one or two groups off the north side.  Please submit counts on the day to Val Wilson on This email address is being protected from spambots. You need JavaScript enabled to view it. for use on the Clyde SOC Grapevine. Please contact Iain Gibson on This email address is being protected from spambots. You need JavaScript enabled to view it. if you need any further information or guidance.