Due to Covid-19 restrictions 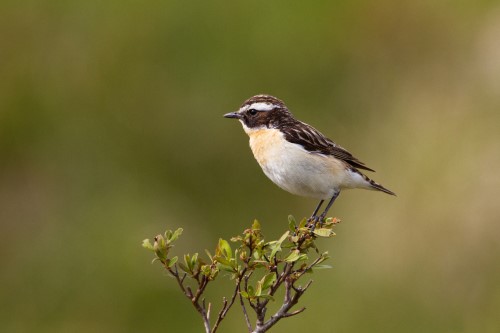 In lieu of the usual BTO/SOC spring gathering, we're holding a virtual event using Zoom. The conference will run over two sessions: Saturday 27th March and Saturday 3rd April, both 3-5pm. There will also be an an optional mid-week evening quiz.

We have an excellent line-up of speakers confirmed:

Science plays a vital role in conserving threatened species and sites around the world, by first understanding key threats and then underpinning the development and testing of solutions. Juliet will outline the nature of the science required to stem species declines and habitat loss using case studies from her 11 years at RSPB, ranging from seabirds in the waters surrounding UK overseas territories to forest birds in tropical west Africa.

Juliet has enjoyed a varied career in conservation science in academia and the environmental NGO sector: Starting as a DPhil student at Oxford studying Dippers and going on to complete a post doc at the University of East Anglia on Brent Geese before taking up a lectureship at the University of Edinburgh. After a short spell of time with Scottish Natural Heritage, Juliet spent ten years at BTO as Head of the Terrestrial Ecology Unit, leading the Trust's work on the Ecology and Conservation of farmland birds. Her most recent post, before taking up her current position, was as Head of International Conservation Science at the RSPB. She held this position for 11 years, leading a team of scientists delivering evidence to underpin the conservation of species and sites around the world, most notably west Africa, The UK's overseas territories and South East Asia. Juliet is an Honorary Professor at the School of Biological Sciences, University of East Anglia, and an Honorary Research Fellow in the Conservation Science Group, University of Cambridge. She has been awarded the BOU Ibis Award (2004) for her work on farmland birds, the BTO Marsh Award (2018) for her contribution to ornithology and the BES Award (2020) for her contribution to the BES. On a day to day basis Juliet is responsible for leading the work of the Trust, under the governance and strategy of the Council.

The impact of lead poisoning on birds

Over one hundred years since Alexander Wetmore documented the hazard to birds from toxic lead ammunition, it is still a problem. Why is that? This talk explores the nature of the problem and why a switch to non-toxic, non-lead ammunition has not yet happened.

Rhys was an undergraduate in Zoology in Cambridge. After postdoctoral research on gamebirds at the Game Conservancy with Dick Potts, he joined the Research Department of the RSPB to work on bird conservation problems. In 1999, he was seconded by the Society to work in the Zoology department at the University of Cambridge where he helps to run the Conservation Science Group. He retired from the RSPB in 2017 but continues research in the field of Zoology – namely the effects of human activities on populations of wild species. This includes effects on population size and demographic rates of agriculture, game management, habitat change, climate change, pollution and deliberate and accidental killing. He uses statistical and simulation models fitted to data on these effects to devise practical interventions that land managers can use to reduce negative effects on wild species so as to improve their conservation status. For more than thirty years, a large part of his research work for the RSPB was focussed on how farming methods could be adapted to allow wild species living on farmland to do better and be more likely to have high populations alongside food production. Rhys is an author and signatory of Wildlife and Human Health Risks from Lead-Based Ammunition in Europe: A Consensus Statement by Scientists. He is also a signatory of an equivalent statement concerning the USA.

Many migratory birds have undergone large population declines in recent decades, whilst others have increased. Population trends differ according to the broad areas where species spend the winter, but the reasons for this are not always clear. This talk will explain how recent advances in tracking technology - including the miniaturisation of light-level geoloctors - have allowed us to track migrants for the first time, including two of our smallest migrants (Wood Warbler and Spotted Flycatcher). Together with a new tracking project in Scotland, this will help us to understand the causes of their population declines, including whether differences in trends within the UK could be due to differences in migratory behaviour.

After carrying out a PhD at the Department of Zoology, University of Cambridge, Chris joined BTO where he is currently a Senior Resarch Ecologist in the International Research Team. He works on the ecology and conservation of Afro-Palaearctic migratory birds and of forest birds across the world. Projects primarily focus of population changes, habitats and migration strategies of these species. Current and recent projects include tracking the migrations of Common Cuckoos through satellite-based radio telemetry, using geolocators to reconstruct the migrations of individual Common Swifts, Nightingales and Pied Flycatchers, large-scale field surveys of migratory birds across a broad latitudinal transect from the Sahel to the moist tropical forest in West Africa, detailed studies of the winter ecology on migrants in tropical Africa, and assessment of the biodiversity value of forests in western Siberia. Previously he has been involved in large-scale studies monitoring the population trends and habitat use of woodland birds in Britain, as well as smaller studies examining a range of processes thought to affect birds in woodlands, such as nest predation by Grey Squirrels and grazing by deer.

20 years of birding on Tiree

The talk will explore key aspects of the nationally important birdlife of the Inner Hebridean island of Tiree by habitat, ranging from breeding corncrakes and waders on its well-managed grasslands, wintering wildfowl on its shallow machair lochs, breeding seabirds and wintering waders along its coasts, to sea-watching from its headlands and searching for rare migrant land-birds in its sheltered gardens.

John has lived and worked for RSPB on Tiree since 2001. He works closely with the island's crofting community on the conservation management of the island's nationally important breeding and wintering bird assemblages including corncrakes, grassland waders, seabirds, shorebirds, Greenland geese and other wildfowl, as well as non-avian species such as the great yellow bumblebee. Previously, he worked for 9 years as a wildfowl researcher for WWT gaining a PhD from Bristol University focussed on the winter feeding ecology of Bewick's Swans, after which he managed Aride Island nature reserve in the Seychelles for 3 years and its host of breeding seabirds and endemic land-birds. John is a keen birder and has found some 25 new species and sub-species for Argyll on Tiree including 2 Scottish "firsts". He has also travelled widely, focussing on survey-work of threatened birds in Russia, SE Asia, Africa and the Americas and has written several wildlife books covering Tiree and Coll, Seychelles, Madeira and the Canary Islands. He sits on various rare bird committees and completed a 5-year stint on SBRC.

Over the last thirty years Common Scoters have become our rarest native breeding duck in the UK as the population has become fragemented and their range has contracted. This talk looks at some of the investigations undertaken to unravel the causes of decline and the measures that are being trialled to tackle the situation.

Alison has worked for the RSPB for the past thirty years, having been involved in a range of different contracts between 1991 and 1995 and since then as a Conservation Officer (CO) and Senior CO based on the Isle of Skye. The work of a CO is hugely varied with no two days the same, with the result that over the years one accumulates a broad knowledge of the area, its landscapes and seascapes, communities, habitats and species, through survey work, practical conservation action, advisory, engagement and education activities.  The huge variety brings both great pleasure and many challenges but it is the in-depth work focussing on species such as Corncrakes, Sea Eagles and Common Scoters that brings the greatest rewards.  Having first worked on Common Scoters in the early 90s, Alison is now RSPB's lead for this species, gaining knowledge of populations both nationally and internationally.

Mark thought he knew about birds, especially those on his local patch. He has concerned himself with finding, identifying and documenting birds at Girdle Ness for over 12 years. However, after taking up sound recording about 5 years ago, he realised that he barely knew anything about anything! Sound recording, and the desire to record new sounds, has opened Mark's eyes and ears to aspects of bird behaviour, site use and occurrence at Girdle Ness that had been under his nose all along...

Mark works in seabird monitoring based in Aberdeen, where he manages a citizen science program that collects data on seabirds and cetaceans from ferries. Prior to this, he spent several years as a bird surveyor specialising in offshore bird and mammal surveys and before that he was a chef. Mark is a keen patch birder at Girdle Ness, though he has other patches which, prior the pandemic, he visited regularly, including Sanday in Orkney, the island of Quessant, Brittany, and the French Pyrenees. Mark's interests include looking for rare birds, seawatching, and sound recording. He also enjoys cetaceans and butterflies. Along with Ryan Irvine, he co-founded Patchwork Challenge, a patch birding competition and community. A member of the SOC North-East Scotland branch committee, Mark is also a member of the Scottish, NE Scotland, and Upper Forth rarities committees.

BTO Scotland is hosting the event this year and the cost to join both sessions is just £5. We really hope that you will be able to join us. Places are limited so book early to avoid disappointment!

Zoom is very easy to use and we will provide full instructions by email prior to the event. To participate, you will need: