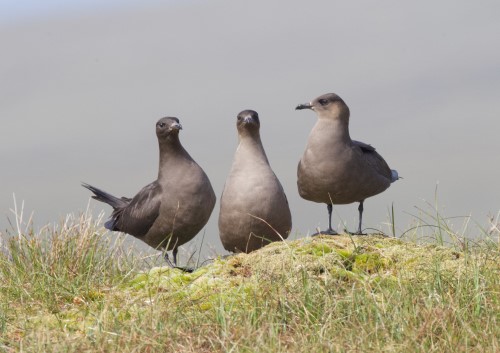 Each spring, the Club arranges a Scottish Birdwatchers’ Conference, organised by a local branch of the SOC, in conjunction with our partners, BTO Scotland. The theme for the 2022 event explores birds and other marine life along Scotland's northern shores and will be hosted by Moray Bird Club (SOC Moray Branch).

At this stage, in light of the uncertainty surrounding the direction of Covid-19 over the winter months, we are not taking payment until nearer the time of the conference. As such, online registration or sending a printed booking form indicates your interest in attending.

The charge for the conference will be £35 (incl VAT) per person. A limited number of discounted places are available to under 30s and students, priced at £25 (incl VAT). This includes registration fee, lunch and teas/coffees. We will email all delegates in February with more details, including how to make payment as well as how to sign up for the outings organised by Moray Bird Club for the Sunday (details below).

To reserve a place, please click on the link below. The closing date for registration (and payment) is Friday 25th February 2022. Bookings will be confirmed by email (or by post, as appropriate) nearer the time and upon receipt of payment. If you have any queries, please call 01875 871330 or send us an This email address is being protected from spambots. You need JavaScript enabled to view it..

Preventing the spread of coronavirus and other respiratory infections

The conference will operate in line with Scottish Government guidance in place at the time and such details will be included in the booking confirmation nearer the time. Elgin Town Hall is a very spacious and well ventilated venue and we will be taking every precaution necessary to keep delegates safe.

The SOC data protection policy is available here. Data from this booking form may be shared with our Scottish Birdwatchers’ Conference partner, BTO Scotland, for the purpose of administering the conference only.

1025
Overview of seabirds of the northern seas - Daisy Burnell

1440
Tracking Arctic Skuas in the northern seas: Where do they go to feed? - Liz Humphreys

1610
Dolphins on our Doorstep: With super photos of dolphins and other cetaceans - Charlie Phillips

Here's who we have lined up for you:

Initially studying chemistry, Colin completed a PhD in heparin biochemistry, including links to tumour angiogenesis, before joining Torry Research Station where he investigated the structure of fish lipids and their nutritional benefits. He subsequently investigated organic contaminants in the marine and terrestrial environments, pathological samples, food-producing animals and food products with a specific interest in their biological effects on marine biota.
Colin has specialised in the methodology associated with determining the state of marine ecosystems. He led on the production the OSPAR Intermediate Assessment 2017, an assessments of the North-East Atlantic, and Scotland’s Marine Assessment 2020. Both utilised new indicators and methodologies, providing an assessment of progress towards achieving a clean, healthy and biologically diverse ocean. Colin was also instrumental in laying some of the foundations for the United Nations Decade of Ocean Science for Sustainable Development (2021 – 2030). Colin continues to study contamination of marine systems by microplastics, heavy metals, persistent organic pollutants and pharmaceuticals, as well as the impacts of ocean acidification and climate change. He was a member of the Pool of Experts for the recently published United Nations World Ocean Assessment 2. Colin retired from the post of Chief Scientific Advisor Marine to the Scottish Government in 2021.

Daisy currently co-ordinates the 4th breeding seabird census for Britain and Ireland, a project developed by the Seabird Monitoring Programme partnership and lead by the JNCC. Prior to working for the JNCC, Daisy spent five years studying at the University of Aberdeen. The first four gained her a BSc in Marine Biology, and the last an MSc in Applied Marine and Fisheries Ecology. Her passion for seabirds, and their conservation, was sparked during her MSc research thesis, which looked at the foraging behaviour of fulmars during the breeding season, in relation to proposed marine renewable sites.

Bob has been a keen Scottish birdwatcher and member of the SOC for over 50 years. Bob lives in Tain, Ross-shire and is secretary of the Highland Ringing Group. The group is involved in long term studies of seabirds, particularly on the Isle of Canna, wildfowl and waders. The latter have been studied on the Moray Firth since 1977 and the group’s recent work on Curlew is the subject of Bob’s presentation. Bob was awarded the Bernard Tucker Medal by the BTO for his contribution to BTO survey work. He was Scottish organiser for the 2007-2011 Bird Atlas and was a co-author of the final book. On top of all this, being an ex-principal teacher of Geography, he is a keen traveller, and has built up an impressive list of Western Palearctic birds.

Ron Summers is a biologist working for the RSPB in Inverness where most of his work has been involved with the conservation of pinewood birds. He was born and brought up in Dundee, and attained a BSc in Zoology after studying at the universities of St Andrews and Aberdeen. He remained at Aberdeen and gained a PhD in 1974 on the ecology of Flounders. Post-doctoral work took him to the University of Cape Town, where he studied waders on Langebaan Lagoon, helping to designate the lagoon as the West Coast National Park. He also worked with the Ministry of Agriculture, Fisheries and Food, dealing with bird pests in agriculture: Starlings and Brent Geese. Having moved to Inverness, he joined the Highland Ringing Group and been involved with various studies of waders.

Roy Dennis MBE is a field ornithologist and wildlife consultant, living in Moray; he worked as assistant warden at Fair Isle Bird Observatory 60 years ago and was the warden from 1963 to 1970 when sea bird numbers were rising rapidly, and Arctic Skuas were common but there were no breeding Gannets. His talk is about the island’s seabirds before GPS and data logging. His Roy Dennis Wildlife Foundation is active on raptor reintroductions, Sea Eagles to the Isle of Wight and Ospreys to Poole Harbour. Roy is an Honorary President of the SOC.

Liz joined the BTO in 2005 following her PhD and Post Doc on kittiwake and gannet foraging behaviour. She has worked on a wide range of projects including urban ecology, impacts of woodland management on birds, importance of coastlines to wintering waterbirds, interactions between waders/hedgehogs and goose management policy. Over the last six years she has been working primarily on understanding the impacts of offshore renewable energy on seabird populations as well managing a number of tracking projects in Scotland. She is the chair of The Seabird Group and a former board member of the World Seabird Union.

Nina O'Hanlon (University of the Highlands and Islands, Thurso)

Nina is an ornithologist living on the north coast of Caithness, working as a research ecologist for BTO Scotland. Nina is also a research associate at the Environmental Research Institute (University of the Highlands and Islands), where she previously completed a post-doc focused on the impacts of plastics and oil pollution on seabirds. Nina has had an interest in birds since childhood, which has led her to live in some amazing places across the UK, including the west coast of Scotland where she spent four years researching Herring Gulls for her PhD at the University of Glasgow. Her main interests are in conservation and ecology, however, she is passionate about all aspects of ornithology and birding, and is the secretary of the Caithness Birds SOC branch and a director with British Birds.

Charlie Phillips is an Inverness based professional wildlife photographer and the Field Officer for the UK based marine charity WDC – Whale and Dolphin Conservation. Charlie has been studying and photographing the resident population of Bottlenose dolphins in the Moray Firth for over 25 years and works closely with Aberdeen and St. Andrews Universities on the long running Bottlenose dolphin Photo Identification study and is the author of an award-winning book on these amazing dolphins called “On A Rising Tide”. Whale and Dolphin Conservation has been the world's leading cetacean protection charity for over thirty years and has offices in the UK, North America, Australia and Germany - the WDC Scottish office is based in the old salmon fishing station at Spey Bay, Moray.

Whether you are interested in exploring the area independently or joining an organised group outing, there are several sites within easy reach of the conference centre.

Viewing the lagoons, saltmarsh, shingle banks and main channel of the Spey estuary. Birdlife will include wildfowl, gulls (perhaps Iceland or Glaucous), divers and sea ducks. Meeting at the Scottish Dolphin Centre in Tugnet, then walking a short distance across the shingle to view the rivermouth and sea.

The estuary is bound by dunes to the north and Lossie Forest to the east. As well as wildfowl, the estuary holds significant numbers of gulls (Iceland and Glaucous both possible). Small groups of Snow Bunting can often be seen near the dunes. Meeting in the estuary car park and walking along the waterfront to Lossiemouth Harbour to look for Purple Sandpipers, seabirds and seaducks.  The walk length ~6km.

A spectacular almost land-locked tidal bay which holds significant numbers of waders over the winter months plus varied wildfowl including Pintail. We will meet at the bird hide car park at the entrance to Findhorn village and then walk a short distance to the bay. We will then drive to Burghead Bay where we can expect sea duck including Velvet Scoters and Long-tailed Duck as well as divers and possibly Slavonian Grebe.

We will have permission to drive through Culbin Forest to gain easy access to the remote RSPB reserve at the Bar. The site is characterised by areas of saltmarsh and at low tide extensive mudflats and sands which hold good numbers of waders. Wigeon and Shelduck are numerous in the channels. We will meet in the Forestry Scotland car park and car share to the start of the walk.

A booking has been made for a 2 hour boat trip into the Moray Firth from Findhorn Marina. Cost, payable on
the day, is expected to be in the region of £40 per head. The inner Moray Firth has considerable numbers of
over-wintering sea duck at this time of year as well as the possibility to see divers and auks. The trip will be
weather dependant.

For those wishing to explore the local area independently then details of other sites (as well as those listed above) can be found on the SOC app ‘Where to Watch Birds in Scotland’. This can be downloaded FREE from App Store and Google Play.