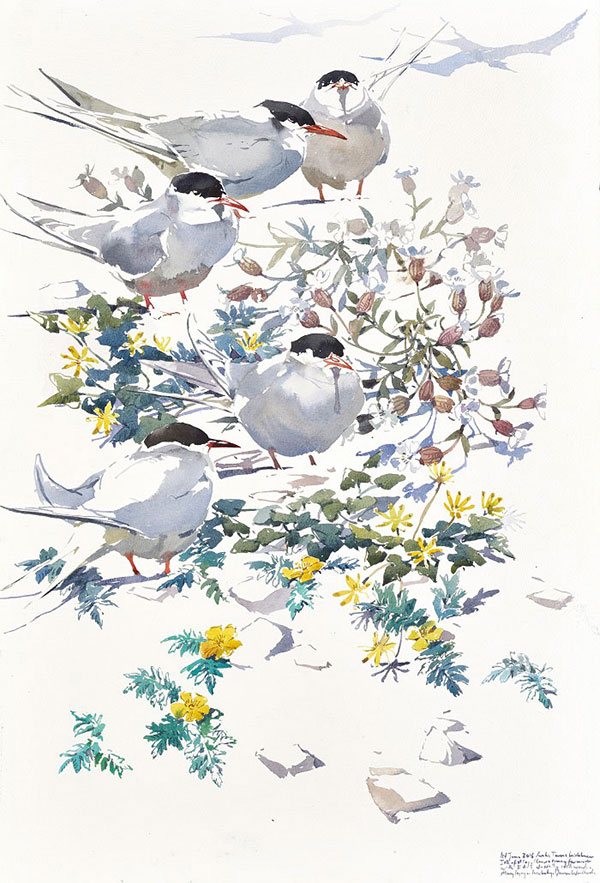 Events for young people in Scotland

The SOC and BTO Scotland are excited to launch a new series of free, monthly events for people under 30.

Delivered on Zoom, attendees will enjoy a diverse programme of interactive online workshops and talks from some of Scotland’s top ornithologists, naturalists and creatives.

Watercolour, photography, film and song - Nature inspires artists to create magnificent works in all these mediums. At this online event, you’ll hear from three acclaimed creatives –wildlife artist Darren Woodhead, singer-songwriter Jenny Sturgeon and photographer and filmmaker Fergus Gill – about how birds and the natural world feature in their work. They’ll take you on a fascinating journey through what inspires them, their career and history with birds and nature, and how they bring them to life, whether through the lens, on paper or the written word.

Fergus is a wildlife filmmaker working for Glasgow-based TV production company Maramedia, and has been the Principle Camera Operator for a number of their recent productions including Stormborn, The Water of Life, Wild Shetland, Wild Way of the Vikings and Born to be Wild. Fergus studied Zoology at the University of Glasgow and after graduating worked as a researcher and camera assistant on a variety of natural history productions. In his younger years he was an avid nature photographer and was twice named the winner of the Young Wildlife Photographer of the Year award. Growing up in rural Perthshire he was surrounded by arable farmland, woodland and moorland, where he had plenty of opportunities to get out and experience nature first hand. He is truly passionate about the natural world and strives to capture this in the work he does today.

Jenny is a singer-songwriter “who brings together the old and new with a rare skill” (R2 Magazine). Jenny's music is rich with imagery and her songs are bound together by common threads of nature and the connection people have within the landscape. Jenny's songcraft is at the centre of her engaging and honest performance. In 2018 she was nominated as Composer Of The Year in the Scots Trad Music Awards and in 2020 won Best Acoustic at the Scottish Alternative Music Awards. Jenny is currently working on her new solo audio-visual performance The Living Mountain, a collection of songs and films inspired by Nan Shepherd's book of the same name. Musical collaborations include writing and performing in the critically acclaimed altfolk band Salt House and in the bird and migration inspired project, Northern Flyway; a project that Jenny co-wrote with musician Inge Thomson. Jenny’s music has been played on BBC Radio Scotland, Radio 3, Radio 6 Music, Radio 2, and Radio Nan Gaidheal - including being featured as artist of the week, live sessions for Travelling Folk and BBC Radio 3 and being featured on BBC Radio 4 Front Row. Jenny's release The Wren and The Salt Air - a commission for The National Trust of Scotland - featured on national STV news. Her song Charmer was featured at number 9 of The Herald’s best 100 songs of 2018.

Darren was born in West Yorkshire, but has lived in Scotland since 1996. He is a graduate of the Royal College of Art in London. All his work is produced outside on location and drawn directly in brush, there is rarely any pre-drawing. By working direct from life, he aims to retain the freshness and energy that working outside can give, often in extreme weather conditions. Darren has exhibited and travelled widely and is a member of The Society of Wildlife Artists. He has won many awards which have seen him invited onto expeditions with The Artists for Nature Foundation to Peru, Ecuador, Israel as well as Portugal, the Spanish Pyrenees and Sark. He has taught at Edinburgh College of Art, from 2001 and currently combines his painting with teaching at both George Watson’s College, Edinburgh and Loretto’s School, Musselburgh. He has been a tutor on the Seabird Drawing Course, established by the late John Busby, in North Berwick since 2004.