Lying 93 miles north of the Scottish mainland like the pieces of an elongated picture puzzle, the Shetland Isles must rate as one of the best birdwatching areas in Britain. The archipelago of over 100 islands boasts spectacular seabird colonies, supports several arctic species breeding at the southern limit of their range and hosts an array of both common and scarce migrants during the spring and autumn.

One of the most popular times to visit Shetland is during the summer months. In June and July, our magnificent seabird colonies are a hive of activity, with 21 of the 24 true British seabirds breeding along the extensive network of cliffs and offshore stacks. They include Puffins, Black Guillemots, Gannets, Shags and both Storm and Leach’s Petrels. Arctic Terns seem to be everywhere, as do both species of skuas which constantly harass feeding terns and Kittiwakes for a free meal. 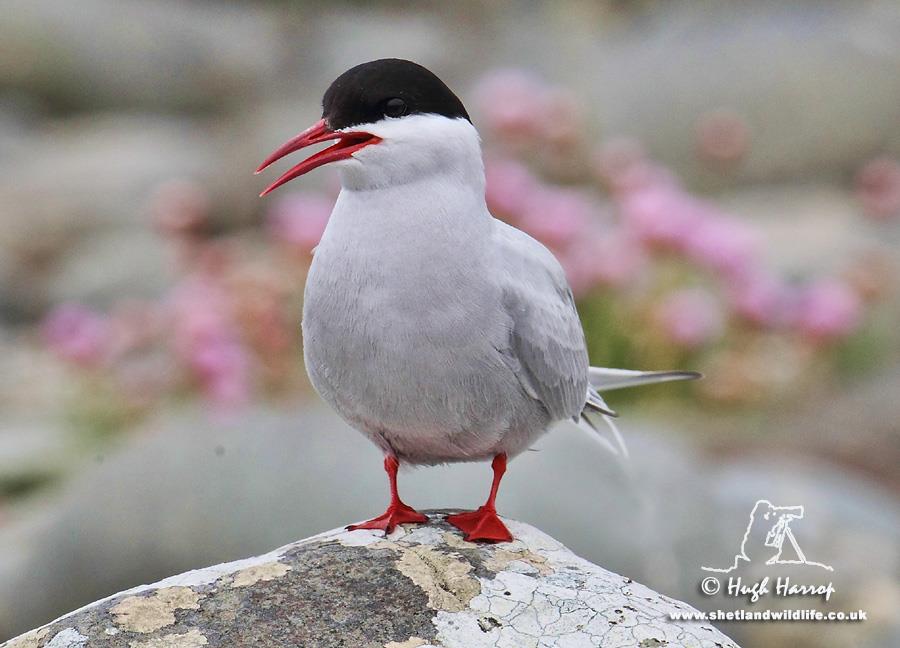 A visit in June or July allows the visitor to witness our special breeding birds. The moorland and wetland areas support Red-throated Divers and breeding waders such as Whimbrel, Golden Plover and Dunlin, as well as several rare breeding species like Red-necked Phalarope and Greenshank. Breeding ducks include Eider, Shoveler, Wigeon and Red-breasted Merganser. Breeding passerines are thin on the ground with about twenty species annually nesting although quality breeders have included Fieldfare, Redwing and Red-backed Shrike in recent years. Merlins breed annually as do small numbers of Peregrines, but breeding Snowy Owls now seem to be a thing of the past.

Many birdwatchers visit Shetland during spring and autumn to seek out scarce migrants. Their occurrence in both seasons relies almost exclusively on the weather. A combination of high pressure and anticyclonic conditions over the near continent, coupled with air flow from one of the eastern sectors, causes north or southward bound migrants to drift west into Shetland, sometimes in dramatic numbers and variety. Airflow from the west may spell total disaster – it is the chance you have to take. Passerine migrants can, and do, turn up anywhere; they are just as likely to be found hopping along a dry stone wall as they are flitting around in a well vegetated garden. You’ll soon notice that trees are almost non-existent here in Shetland!

Spring migration gets underway from about the middle of March but it is not until the latter part of May that things start to hot up. If a spring visit is to be made, the period between the latter half of May and the first two weeks in June is advised – then you can combine seabirds, breeding birds and migrants into your holiday itinerary. Given suitable conditions during this time, a wide variety of scarce migrant species are likely to be encountered, which may include Bluethroat, Wryneck, Red-backed Shrike, Common Rosefinch, Marsh and Icterine Warblers, Golden Oriole, Hoopoe and Ortolan Bunting. Rarities are also features of these arrivals and in recent years, the period has produced Red-footed Falcons, Red-rumped Swallows, Thrush Nightingales, Great Reed, Subalpine and Greenish Warblers, Red-throated Pipit and Rustic Bunting while extreme rarities have included Pallas’s Sandgrouse, Common Yellowthroat, Needle-tailed Swift and Collared Flycatcher.

‘Seawatching’ may also be worthwhile as Pomarine and Long-tailed Skuas are known to pass headlands on the west coast, sometimes in dramatic numbers – a birding colleague and I once counted over two thousand Pomarine Skuas from the headland at Watsness in just eleven hours watching! A world record.

Autumn migration starts in July, when ‘passage’ waders start to appear. Passerines usually start arriving in mid-August, when suitable conditions can induce arrivals of common migrants as well as Barred and Icterine Warblers, Wrynecks and Red-backed Shrikes. From then on, migration continues until early November, with the peak rarity period falling between the last two weeks of September and the first two weeks of October, although the interim periods can be equally productive. Like Spring, migrant and rarity occurrence depends on the weather conditions although the eastern bias is sometimes broken by the arrival of a North American vagrant. Annual autumn drifters include Richard’s Pipit, Yellow-browed Warbler, Red-breasted Flycatcher, Ortolan Bunting and Common Rosefinch while Yellow-breasted, Rustic and Little Buntings, Short-toed Lark, Arctic and Greenish Warblers and Red-throated Pipit are just about annually recorded. Shetland usually produces a major rarity every autumn – Pallid Harrier, Sharp-tailed Sandpiper, Sandhill Crane, Great Knot, Western Sandpiper, Hawk Owl, Thick-billed, Pallas’s Grasshopper, Rüppell’s, Yellow, and Chestnut-sided Warblers, Pechora Pipit and Ovenbird have all been highlights of past autumns.

It is a shame that few birdwatchers come to Shetland during the winter months. Hundreds of Long-tailed Ducks and good numbers of both Great Northern Divers and Slavonian Grebes can be seen in the sheltered voes along with a King Eider or two. The harbours host both Glaucous and Iceland Gulls, sometimes in impressive numbers. Exciting rarities from the arctic turn up annually and have included both Ross’s and Ivory Gulls, Brünnich’s Guillemot, Harlequin Duck, White-billed Diver and Gyrfalcon. Clearly, Shetland is a birders paradise during all seasons.

Follow the minor road from the A970 at Grutness and continue to the car park near the lighthouse. Scatness is reached by taking a minor road off the A970 just beyond Toab.

During the summer months thousands of seabirds breed on the cliffs at Sumburgh Head. They include Black Guillemot, Puffin, Shag, Guillemot, Razorbill, Kittiwake and Fulmar. Arctic Terns breed at Grutness and Scatness. The area is also one of the best in Shetland for migrants and rarities.

Turn onto minor road signposted Eastshore from A970. Avoid walking onto mudflats.

Passage waders in spring and autumn include Ruff, Greenshank, Spotted Redshank, Little Stint, Dunlin, Ringed Plover, Black and Bar-tailed Godwit. Skuas and Gulls patrol the area in summer while in winter, Long-tailed Duck, Eider, Goldeneye, Red-breasted Merganser, Iceland Gull and Glaucous Gull are regularly seen. Many rare waders have been found including Great Knot and Western Sandpiper and the bushes around the pool have supported Dusky Warbler, Woodchat Shrike and Rustic Bunting during migration. 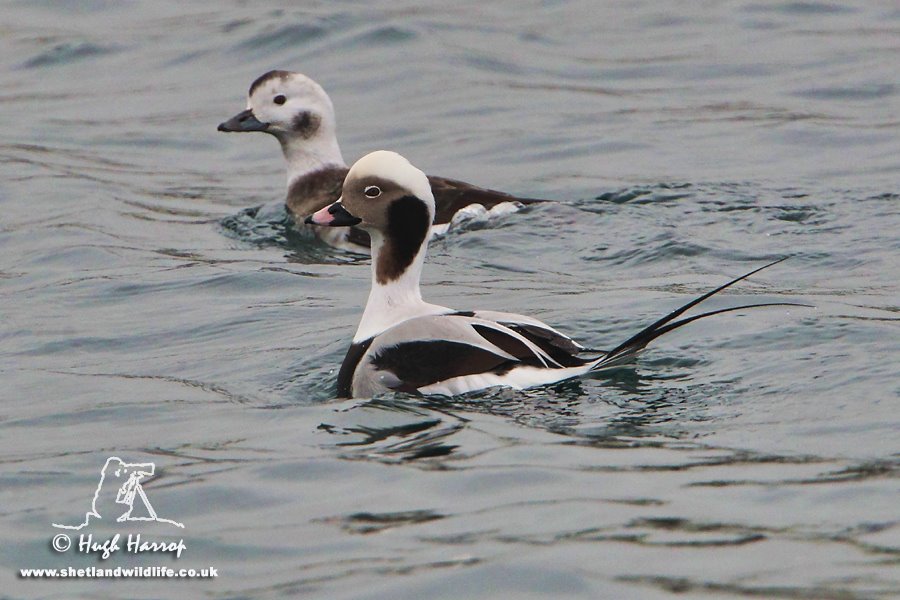 Spiggie is signposted off the B9122 a quarter of a mile south of Scousburgh village. The loch is best viewed from various vantage points along the road which skirts the loch.

In spring and summer, many freshwater wader species breed here including Snipe, Redshank and Lapwing. Large numbers of Great Skuas bathe in the loch along with smaller numbers of Arctic Skuas and Arctic Terns. Small numbers of passage waders are also regularly seen. In autumn and winter, the loch supports large numbers of Whooper Swans and ducks, including Scaup, Goldeneye, Long-tailed Duck and Wigeon. The surrounding fields also host hundreds of Golden Plovers.

Main commercial centre of Shetland and the arrival point of sea passengers. The town is situated 25 miles north of Sumburgh.

The A970 runs through Lerwick. The harbour is situated to the east of the town. Clickimin Loch and Seafield lie on the western outskirts.

In spring and summer the harbour is an excellent place to see Great and Arctic Skuas, Black Guillemots and Arctic Terns. In winter it holds good numbers of Glaucous and Iceland Gulls, Long-tailed Duck and a few Little Auks. The trees at Seafield are attractive to migrant passerines, especially warblers. Clickimin Loch holds good numbers of diving ducks during the winter.

An island which lies a few hundred metres off the east coast of Bressay. HU542405.

The island is managed by Scottish Natural Heritage and allows access between mid-May until the end of August. Park on Bressay at HU521409 and walk down the hill to a small boat landing area. Resident wardens provide a ferry service in Zodiac inflatables across Noss Sound. Check with the tourist office for opening times and alternative trips by boat from Lerwick.

The island is home to thousands of seabirds during the breeding season and hosts Arctic and Great Skuas, Gannet, Kittiwake, Arctic Tern, Razorbill, Guillemot, Puffin and Black Guillemot.

Tresta Voe can be viewed from the A971 which skirts the northern shore. For Reawick, take the B9071 off the A971 a mile west of Bixter and continue for about three miles until the voe appears.

Reached by taking the roll-on roll-off ferry from Gutcher (Yell) or Belmont (Unst). Entrance to the RSPB reserve is by prior arrangement with the summer warden. Tel. 01957 733246.

Fetlar is famous for the Snowy Owls which bred on the island between 1967 and 1975 and the non-breeders that followed. Unfortunately, their occurrence here is far less predictable now with only a handful of sightings in recent years. The island also hosts a small population of Red-necked Phalaropes (often the entire UK population!) which are best seen from a hide at the Mires of Funzie. Breeding waders include Whimbrel and large numbers of seabirds also breed on the island including Skuas, Storm Petrel and Manx Shearwater; the latter duo are best seen at night on the peninsula of Lambhoga.

Situated in the north west corner of Unst.

Take the B9806 from Haroldswick and follow it to the reserve car park. There is a visitor centre at the shore station.

The reserve holds nationally important numbers of seabirds including 9,500 pairs of Gannets and 800 pairs of Great Skuas. Kittiwakes, Puffins, Razorbills and Guillemots also breed on the reserve as well as small numbers of Red-throated Divers. Hermaness is also famous for ‘Albert’ the Black-browed Albatross which returned almost annually to the outcrop at Saito from 1972 – 1996. 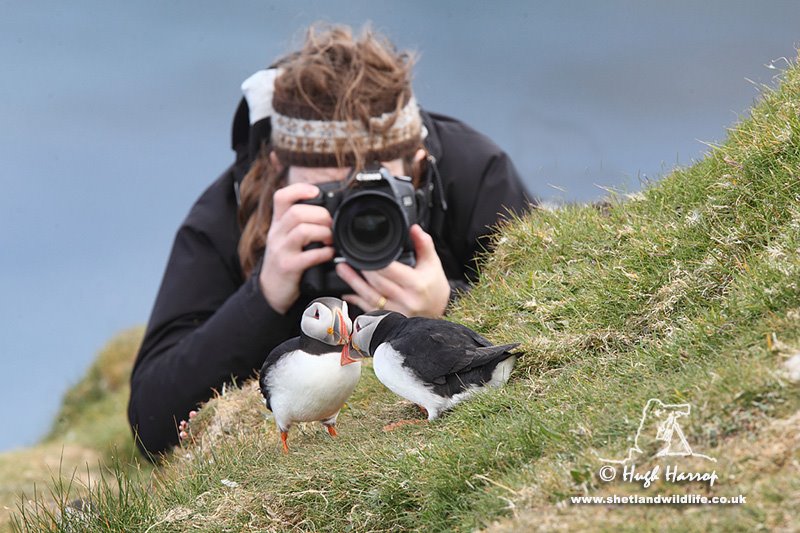