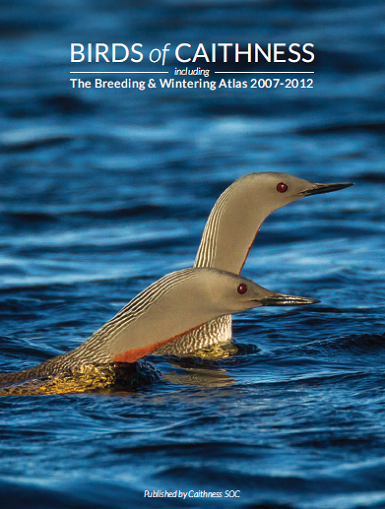 The ‘Birds of Caithness’ DVD was published in December 2015 by Caithness SOC.  It is the distillation of over 200 years of observations documenting the fascinating birdlife of the county.  The 458 page document is formatted to allow for viewing either as double-page spreads on the web or as high-resolution pdfs.

The project started in 2007, when four years of fieldwork began across the county in co-ordination with the British Trust for Ornithology’s (BTO) national UK and Ireland Atlas.

In 2010, Caithness SOC decided to take up an invitation from the BTO (to all counties) to create a local atlas. The aim was to describe the status of all species which occurred in Caithness during 2007-2012; produce the most comprehensive set of maps possible of both wintering and breeding species; and to illustrate as many species as practicable with photographs taken in the county.

Seven authors wrote over 240 species’ accounts and many of the authors also contributed to the editing, photography, map-making and artwork.

The species accounts are preceded by a detailed study of the history of birdwatching in Caithness, going right back to the 18th century when Thomas Pennant, a Welsh naturalist, toured Scotland in 1769 and 1772.  Habitat and biodiversity, as well as local birdwatching sites and the surveying methodology help provide a wide range of background information.  ‘Birds of Caithness’ is intended to assist both local and visiting birdwatchers, and it is hoped will become an invaluable tool for conservation bodies, schools, planners and policy makers.

The format is perhaps unconventional, but is designed to make the information as accessible as possible for a wide demographic of readers. The species’ accounts are divided into two distinct sections – ‘Regular’ and ‘Scarce & Rare’ – but crucially their status relates to a specific period, namely from the start of the previous Breeding Atlas in 1988 to the end of the recent survey in 2012. This is almost one ‘generation’ and is a timespan within most birdwatchers’ experience.  What is clearly revealed in the texts and maps is the extraordinary change of fortunes for so many species within such a relatively brief snapshot.  In many cases this is a revelation and demonstrates the rapid effects of land usage and human interference on populations. Future trends are stated or hinted at – sometimes offering a promising prognosis but more often suggesting a continuing downward curve in abundance and distribution.

Most of the data have not previously been published and some are significant or even of national importance. However, resources and the serious lack of observers in Caithness have limited the depth of research possible, so it is hoped that this publication will help inspire a greater interest in the county’s birds and contribute to an even better understanding of their lives in the future.

Funding for the project was received from the Caithness & North Sutherland Fund as well as other organisations and individuals to whom Caithness SOC is extremely grateful.

Only 200 DVDs have been produced and already half have been sold or given as complimentary copies.

Birds of Caithness costs £15 + P&P and orders can be placed at: This email address is being protected from spambots. You need JavaScript enabled to view it.