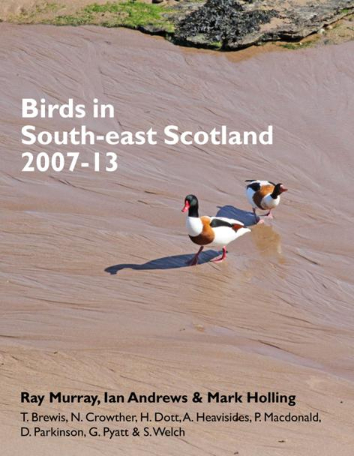 A tetrad atlas of the birds of Lothian and Borders, RRP £40

This exhaustive tetrad study, based on 1,770 2x2 km plots and nearly half-a-million items of data collected by over 850 observers, covers the recording areas of Lothian and Borders, an area of 6,456 km². The varied habitats of this region, from estuarine mud and sandflats of the inner Forth to rocky shorelines backed by cliffs in Berwickshire, from the cereal farming areas of the Merse and lochs and reservoirs of the hills to the extensive stands of conifer plantations, as well as heather-clad uplands, river courses and the built-up areas of Edinburgh, all contribute in providing a varied avian fauna that is fully reflected in this milestone publication.

We are now pleased to say that the Atlas has been published by SOC and is be available at RRP £40 from the SOC at Waterston House, Aberlady, East Lothian (cash and cards) and Viking Optics, Rose Street, Edinburgh (cash only). Anyone wishing to buy a copy, but unable to collect at either of these two venues, should email This email address is being protected from spambots. You need JavaScript enabled to view it. for further information. 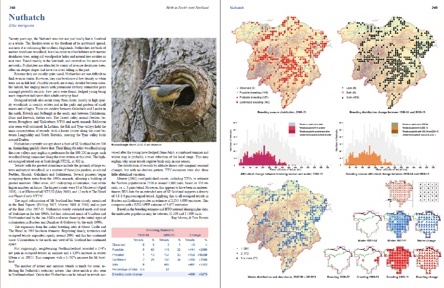 Each of the main species has two pages devoted to it, with a full page of attractive, easy-to-read maps showing seasonal distribution and abundance, change in breeding distribution since 1988-94 (the period when the last breeding atlas survey was carried out), maps at the 10x10 km scale which compare changes in breeding and winter distribution over the past 50 years and graphs showing distribution by altitude between the seasons and between the two atlases. These are supported by an account which helps to explain the distribution, its seasonal changes, changes over the years, supported by estimates of current population and their recent trends.

The 554-page hardback will include introductory chapters and appendices, in addition to the species accounts and maps.

Some sample pages from the book are available to download by following this link.

Species abundance maps for the summer period were not published in the book due to space constraints. Abundance maps were only published for non-breeding summer visitors to South-east Scotland. A pdf containing a complete set of breeding season abundance maps is available to download by following this link (note that the file size = 348 MB).