Following analysis and consideration of the most recent findings on the use of the "type C" excitement call to identify Scottish Crossbill, as described below on the webpage, SBRC has concluded that the species can no longer be identified using this characteristic. This is described in more detail in a paper published in Scottish Birds which can found here.

SBRC will therefore no longer be considering records of Scottish Crossbill until this issue is resolved.

Since the beginning of 2012, the Scottish Birds Records Committee (SBRC) has been responsible for reviewing records of both Scottish Crossbill Loxia scotica and Parrot Crossbill Loxia pytyopsittacus, but only from outside their core breeding areas in Scotland (ap Rhienhallt et al. 2011; Figure 1). 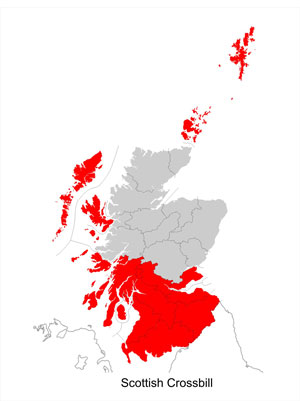 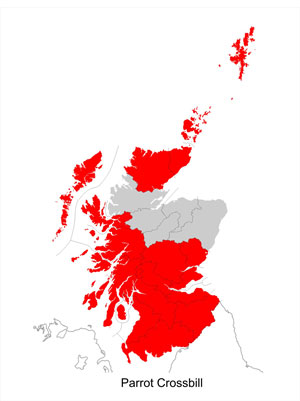 Figure 1. Geographical areas (marked in red) outside the core breeding areas for which SBRC would like to receive submissions of all claimed sightings of Scottish Crossbill (left) and Parrot Crossbill (right).

SBRC proposes the following approaches when considering claims of Parrot or Scottish Crossbill from either the Scottish Mainland, or islands such as Orkney, Fair Isle, Shetland and the Outer Hebrides.

The identification of these two species, and separation from Common Crossbill Loxia curvirostra, which breeds widely through much of mainland Scotland, is extremely difficult.

Though structural features are useful, it is now understood that calls, particularly so-called ‘excitement calls’, are crucial to allow safe separation of the three species, particularly in areas where they can be found breeding sympatrically, such as on the mainland (Summers et al. 2007). To help observers with this we include sonograms (Figure 2), and audio clips of the three species excitement calls which observers can download for personal use. These were all kindly supplied by Ron Summers. 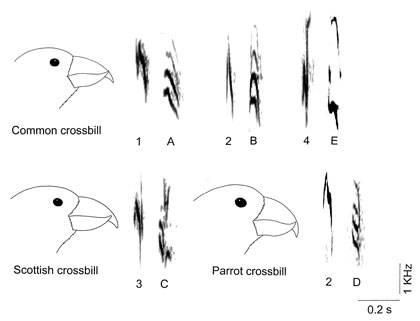 We urge observers when finding potential Scottish or Parrot Crossbills outside the core breeding areas on the Scottish Mainland to endeavour to make a recording of the excitement calls, and to include it with the submitted description of the bird(s). SBRC has determined that for records of Parrot Crossbill on the mainland, where confusion with Scottish and Common Crossbills is a real possibility, a recording of the excitement call will be required for acceptance.

For records of Parrot Crossbills from Orkney, Fair Isle, Shetland and the Outer Hebrides, where Scottish Crossbills have never been documented and so are unlikely to be present (Forrester et al. 2007), although calls of recordings are welcome, in future they will not be considered mandatory for acceptance. It is important to stress however, that detailed field notes and/or photographs will still be expected, and that only birds showing the classic morphological features of Parrot Crossbill are likely to prove acceptable.

This approach brings SBRC into alignment with the other European records committees. Parrot Crossbills are known to appear in higher than normal numbers outside their core ranges in Europe in so-called ‘irruption years’, with large scale, long distance movements thought to be driven by widespread failures in cone crops. Such irruptions will also be considered in the adjudication process by SBRC, in order that such irruptions are properly documented on a consistent basis in Scotland and across Europe.

Chris McInerny, on behalf of SBRC