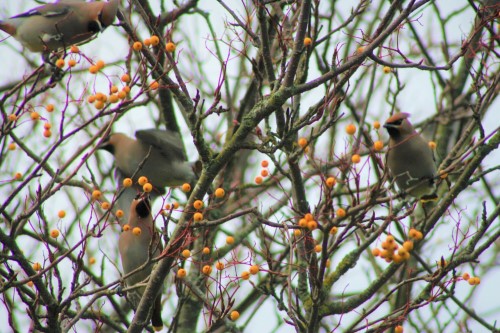 Towards the end of autumn, I always anticipate whether we will see an irruption of (Bohemian) Waxwing (Bombycilla garrulus) – when large numbers migrate to Britain, sometimes in flocks of hundreds, from their summer breeding grounds in Scandinavia and Russia. When this happens, the birds are often easily spotted in carparks around our towns and cities where ornamental rowan trees bear their favoured berries. It isn’t every year that we see these birds in large enough and widespread numbers to constitute what is known as a ‘Waxwing Winter’ and this year has been one of those years – a noticeable absence of Waxwing stripping berry bushes and brightening overcast skies with their trilling call. Visual mapping data published recently by EuroBirdPortal (using BirdTrack records) for the period 22/01/20 to 16/01/21 supports this observation, showing that Waxwing are currently concentrated in Sweden and Northern Denmark with only a handful of birds turning up in the far North and East of Britain. So, why was this year not to be a Waxwing Winter for the UK?

Waxwings breed in boreal forest and muskeg (swamps in northern North America) and prefer relatively open forest or edge, usually coniferous such as spruce (Picea), pine (Pinus) and occasionally birch (Betula) forest or mixed forest found in sub-arctic regions of Northern Europe, Northern Russia and North America. They prefer well-drained areas near major rivers, normally including dense growth of fruiting plants (Mountjoy, 2005). The large arrivals of Waxwings seen in mid- winter are thought to belong to the Fennoscandian breeding population. Their breeding season is relatively late with egg laying beginning in May. Their predominant diet in summer is insects, switching to fruit and seeds in the winter (Mountjoy, 2005). It is this reliance on seeds (or fleshy fruits) that drives them to range away from their breeding grounds (Fouarge & Vandevondele 2005, Witmer M. & Avery M. 2003, Brochier et al (2010)) but how far and wide can vary dramatically and is dependent on numerous factors.

In some years, trees and shrubs in their breeding grounds are laden with seeds and fruits of various kinds, but in other years, they bear almost none. Yields of trees vary, sometimes due to the natural fruiting cycle of the tree and sometimes due to crop failure from bad weather. Fruiting is concurrent in a region so all trees have similar poor or good yields in the same year. In any one area, most trees of the same species fruit in phase with one another partly because they are growing under the same or similar weather conditions, and often those of several different species also crop in phase. The result is an enormous profusion of tree fruits in some years, and practically none in others; good crops almost never occur in consecutive years, and nor do poor crops, but each good crop is usually followed by a poor one (Koenig & Knops 1998, 2000) – it’s the latter that can push Waxwing to migrate large distances in the search of food. 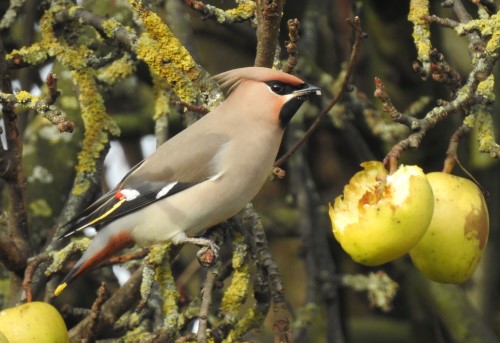 Alongside the availability of food, the ratio of birds to food is another key factor governing Waxwing migration. When food is plentiful during the breeding season, this can lead to a growth in population, which eventually comes up against a year in which the berry crop is not plentiful enough to support the birds during the winter months. It doesn’t figure that poor crop years alone in breeding grounds necessarily result in irruptions elsewhere; sometimes low food supplies coincide with low population numbers and therefore little migration occurs, while other times, there can be a moderate food supply but bird numbers outstrip supply, forcing large-scale migration and the resulting Waxwing Winter in the UK.  Big and early autumn movements of Waxwing could be caused by psychological stresses resulting from high population numbers producing unusual restlessness and excitement, which has a survival value in stimulating the birds to fly in advance of the failure of food supply before starvation weakens them (Lack, 1954). Heredity may also play a part in Waxwing migration, as some birds and some populations may have a stronger genetic urge to migrate than others (Axell, 1966).

A further potential cause of bird irruptions is the actual severity of winters. This could be a factor in determining how far south birds like Waxwing irrupt (Elkins 2005, Newton 2006). In the Middle East, the Waxwing is considered a rare and irregular winter visitor to Iran and Turkey, and a vagrant to Cyprus and Israel (Porter & Aspinall 2010). There have been few records of the species in the past century in Iran. However, during the winter of 2016/2017, an unusual increase in the number of records of Waxwing was attributed to a rare cold winter in late November 2016–March 2017 (Khaleghizadeh, 2019). 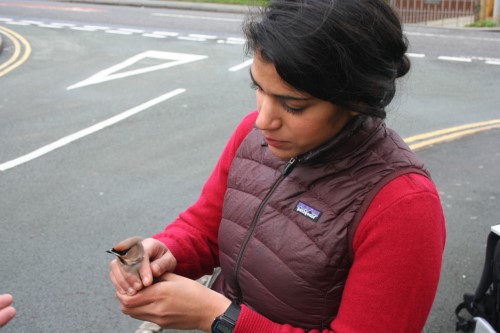 A big difference between irruption and migration is that while species we associate with migration follow a set annual route, irruptive species like the Waxwing can range on wildly different tangents from year to year. This is supported by ring recovery data, which has shown that individuals have been found in one winter hundreds or thousands of kilometres from where they were ringed in a previous winter. Extreme examples include Waxwings (6000 km, Ukraine to Siberia) as well as Siskin (Carduelis spinus) (3000 km, Sweden to Iran), a Pine Siskin (Carduelis pinus) (3950 km, Quebec to California), and a Common Redpoll (Carduelis flammea) (8350 km, Belgium to China) (Newton, 2006).

Although here in the UK we cannot be blessed with the spectacle of a Waxwing invasion every winter, there are places where the birds will consistently turn up even outside of irruption years. Regions in the North and East of Scotland are most likely to hold annual records of the species and Aberdeen has unofficially been deemed the Waxwing Capital of the UK for its consistent year on year sightings. Neighbouring Morayshire is another region with consistent annual sightings and Martin Cook, Moray & Nairn Recorder, shares some insight:

‘Waxwings visit Moray & Nairn almost annually, but in highly variable numbers. They are well reported by non-birder members of the public as they often appear in towns where they flock to feed on the berries of ornamental shrubs and trees, especially rowans – several of our towns are well supplied with ornamental rowans. Since 1990, Waxwings have been seen in every winter except 1992-93. In some winters only a few are seen but flocks of 50 or more were counted in nine of these winters. The most notable of these invasion winters was 2004-05 when an exceptional arrival in late October-early November saw numbers building to a flock of 1225 (counted from photographs) in Forres on 31 October. Other large flocks at that time included 500 in Elgin, 250 at Kinloss, 200 at Kingsteps and 120 in Fochabers, with flocks of 20-100 in seven other towns and villages. Another exceptional winter was 2016-17 when, in a November influx, 14 localities hosted flocks exceeding 50, eight holding flocks of over 100 birds, notably 600 in Forres, 500 in Elgin, 400 in Mosstodloch and 350 in Nairn.

The timing of the onset of a significant arrival varies between winters. Since 1990-91, influxes have started in October (4 winters), November (7) and January (3). The earliest date was two birds in Buckie on 7 October 1970. Once berries have been stripped and food supplies dwindle, large flocks move on and much smaller numbers remain for the rest of the winter. In winter 2020-21, two arrived in Elgin on 2 December and slowly increased to 11 birds on 18 December – they are still there. Otherwise, this winter, two in Nairn 3-6 December and a flock of 20 flew over Mundole on 13 December. I’m not sure why Moray & Nairn should be specially favoured by Waxwings. Perhaps it’s just that we have plenty of berry-bearing ornamental trees and observant members of the public who take the trouble to report them.'  (Martin Cook, Moray & Nairn Recorder, January 2021) 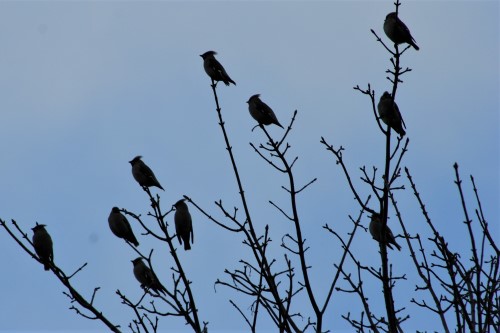 There seems to be an almost infinite range of variability between the fully migratory species and those that show this form of behaviour only very occasionally and irrupt in response to the key factors mentioned here - fruiting cycles of trees, ratio of birds to food, genetic urges and severity of winters. It is not really so surprising that migration behaviour of one sort or another provides a solution to food supply problems. To me, Waxwings are made all the more extraordinary by the volatile pressures they are under that lead them travel immense lengths to survive, which is what I will be thinking next time I marvel at these stunning birds during a Waxwing Winter.

Cedar Waxwing: On 25th June 1985, a Cedar Waxwing (Bombycilla cedrorum) was found on a bare headland on Noss, Shetland, Scotland. Although this sighting was dismissed at first as an escaped cage-bird, subsequent occurrences of the species in England and Iceland support the suggestion that it should be regarded as the first occurrence of this Nearctic species in the Western Palearctic (McKay, 2000).

Khaleghizadeh, A. (2017). Irruption of Bohemian Waxwings Bombycilla garrulus and Eurasian Bullfinches Pyrrhula pyrrhula in Iran in the winter of 2016/2017. Sandgrouse (41) pp. 80- 85