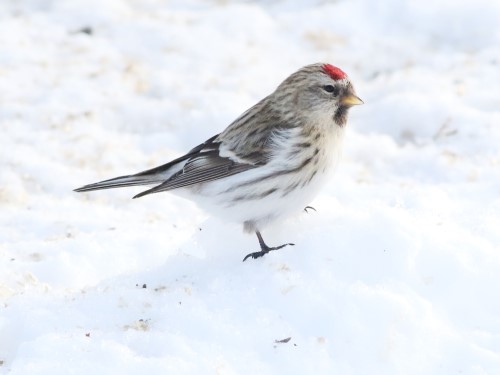 Every reader of Scottish Birds will of course be familiar with the name ‘Coues’s Arctic Redpoll’ (photo, right), whose pictures adorn pp. 274-5 of the Vol 40(3) September 2020 issue.  However, to make assurance doubly sure, its scientific name would have been illuminating, especially as field guides overlook the various Redpoll races which in any case have been dealt a taxonomic reshuffle since I was a lad – sauce for the Merlin (pp. 195, 213) is sauce for the Redpoll.  A reference in each number of Scottish Birds to the taxonomy etc. would add further clarity.

But why the current fashion for single quotation marks for vernacular subspecies names?  The Handbook (vol.I, Witherby et al. 1938) has none, thus: 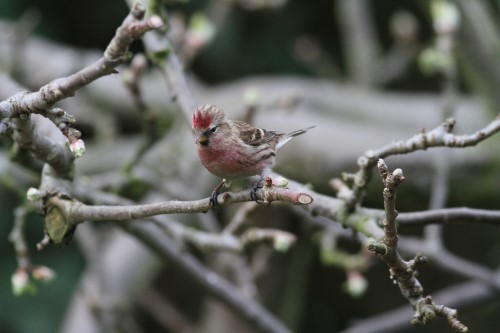 BWP (vol. VIII 1994) has both subspecies under “Carduelis hornemanni Arctic Redpoll” (no quotation marks) adding ‘Hornemann’s Redpoll’ (single quotation marks) for nominate hornemanni but no vernacular subspecies name for exilipes, only a reference to its original description (Coues 1862) which however is absent from the list of references (The Handbook gives it).

The “Scottish List – species and subspecies” (Clugston et al. 2001, Scottish Birds 22: 33-49), which follows the British Ornithologists’ Union Records Committee taxonomy of the time, lists exilipes under “Arctic Redpoll Carduelis hornemanni” (no quotation marks) with no vernacular name for either subspecies.  Happily The Birds of Scotland (Forrester et al. 2007) shows “Coues’s Redpoll Carduelis hornemanni exilipes” (no quotation marks) under Arctic Redpoll but less happily the redpolls have since been separated from the linties Carduelis spp. and reclassified into the revised genus Acanthis.  For all I know, the SOC website may reveal more. 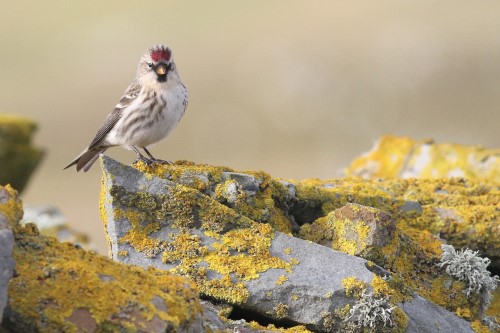 Wild frontiersman US Army surgeon Elliott Coues (1842-99) led an eventful life (see Barbara & Richard Mearns 1988 Biographies for Birdwatchers).  His Handbook of Field and General Ornithology (1890, frequently quoted by the Mearnses in The Bird Collectors 1988) declares (Part I Field ornithology): “The double-barrelled Shot Gun is your main reliance”.  Nowadays anyone who has tried to take convincing field notes of a skittish redpoll or Schrödinger’s stonechat may well envy such an option. Under “Hygiene of collectorship” subheading “Stimulation” Professor Coues observes:

When cold, fatigued, depressed in mind, and on other occasions, you may feel inclined to resort to artificial stimulus.

He then devotes a page (c. 500 words) to the use of alcohol to relieve the rigours of field ornithology.  The late Douglas Weir (obituary Scottish Birds 21: 121-2), a rigorous field ornithologist himself, would quote Coues’s advice:

The present writer can vouch for two; at times Doug would ignore any of the three, alas!

There was a damn Yankee called Coues

Who warned birders not to carouse*

A name spelt to confuse