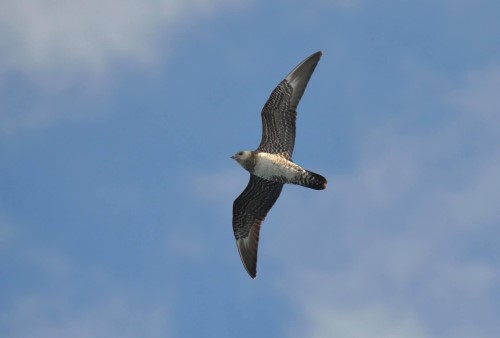 How much of Scotland’s birdlife are we yet to discover? This might seem like a silly question to ask about a small country that is relatively densely populated with birders, but there are surely still some surprises out there. And when I say out there, I mean way out there, beyond the horizon. Scotland has a lot of sea, and recent discoveries such as regular winter aggregations of White-billed Divers in the central North Sea suggest that there may be significant populations of interesting birds waiting to be discovered in Scottish waters. The image on the right shows a Long-tailed Skua, taken about 150km north-west of St Kilda.

One of the last great frontiers of Scottish birding is the pelagic west coast. Way beyond Lewis and Harris, we find some of our deepest seas and this ecosystem has a suite of fascinating and poorly known creatures associated with it. We know about aggregations of Fin, Sperm and Pilot whales, and regular encounters with bizarre deep-sea species like Sowerby’s and Cuvier’s beaked whales from SCANS - decadal cetacean surveys that cover the whole of the European North-West Atlantic. But what do we know about the birds?

Unfortunately, the answer is ‘not very much’. Over the last 40 years or so, the ESAS database has accrued millions of records of seabirds from NW European waters, but only a handful of these come from Scotland’s NW approaches. However, there may be scope to find out more. I was lucky enough to be a bird observer on the last SCANS survey in 2017, on a vessel that covered the Rockall Trough and associated sea mounts. These uneven areas of the seabed cause upwellings which in turn make for very rich waters, and even this far from land, this means birds.

Out here, deep water-loving species such as Fulmar were numerous, and the Storm Petrels that we saw on the way out were replaced with Leach’s Storm Petrel. We encountered numerous Gannets, and Manx as well as Sooty Shearwaters. Auks and Great Skuas were regular, and we had occasional sightings of Grey Phalarope, and immature Arctic Tern.

One species we found in much larger numbers than anticipated was Long-tailed Skua. Over a couple of weeks, we saw over 60 birds, and all but one were immature. The breeding season distribution of immature Long-tailed Skua is pretty much unknown but it has been suggested in the past that they linger on or near wintering grounds in the southern oceans. Did we encounter an unusual event, or are these birds regularly using Scottish North Atlantic waters? More regular surveys of this area during mid-summer will surely give us the answers.

Other, more exotic species may well be using these seas more than we know. Recent forays west of Shetland, and into waters around St Kilda have encountered Wilson’s Storm Petrel, a species regularly found on pelagic trips from South-West England, but previously known from just a handful of records in Scotland.  Surely this species is a more regular visitor than we realise? And what else might be out there? What proportion of Arctic breeding Pomarine and Long-tailed skua, Sabines Gulls and Grey Phalaropes pass through? Are Brunnich’s Guillemot regular on their journeys to the mid-Atlantic? There are so many questions! 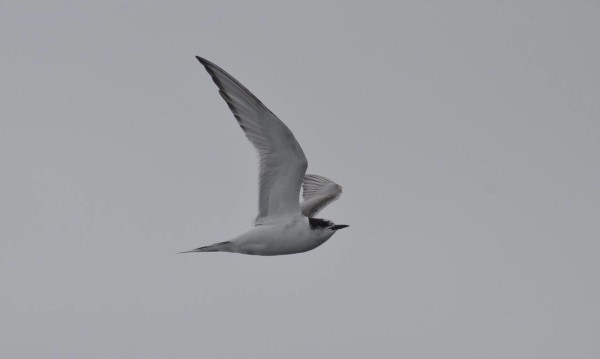 Tracking studies suggest Zino’s Petrel might occur in Irish waters, so what about its more numerous relative the Fea’s Petrel? And how about something even rarer, in a UK context? With South polar skuas regularly found on the other side of the North Atlantic, surely it’s a matter of time before one turns up here.

Glamorous rarities aside, these seas probably hold important numbers of some species, and it might be worth considering what potential issues these birds could face; the isolation, and depth of the water might mean that they are relatively safe from some threats, such as windfarms and oil spills, but the area is still fished, and there is military activity too (although perhaps this is more of a concern for the whales and dolphins).

Collecting data on birds at sea is expensive and time consuming, which means that it’s not only our furthest flung waters that could hold surprises. Within the last ten years, a regular spring staging post for White-billed Divers was discovered in the Moray Firth, within sight of land! There are so many more questions to be answered, and who knows what might be lingering over a horizon near you….