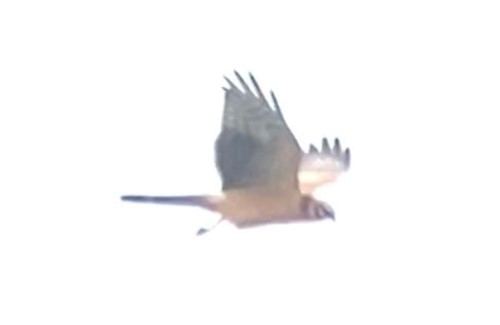 Sunday 19th September 2021 would be a welcome day off for me in my busy university life, and so, seeing the decent weather forecast on the east coast, my friends George Dunbar and Dan Burt organised a day out birding with me around Fife Ness and Kilminning. George and I had been messaging on Twitter the previous evening, each taking guesses at the species of migrants we were hoping to find: perhaps a Common Rosefinch or a Barred Warbler, or maybe even one of the leaf warbler species. We were excited.

Dan and George arrived at Kilminning before me, picking up two Sooty Shearwaters and a Grey Phalarope on a sea watch – Grey Phalarope being a fantastic record, which I was disappointed not to have seen myself. When I arrived, I met George and Dan by the old toilet block. We scoured the trees and bushes of Lower Kilminning for any passerines, but it was much quieter on the whole than we had anticipated. A Garden Warbler and a male Blackcap were feeding in the Elders, where we had expected to find a Barred Warbler.

Surprised by the lack of passerines, we decided that perhaps a sea watch would be more productive, as I still needed Sooty Shearwater for my year list, and so we moved to the end of the site and turned our gaze upon the vast expanse of sea before us.

It wasn’t long before George put us on to a skua, which we followed as it flew south – it soon became apparent that this was an Arctic Skua. I remember following the skua with my scope until it changed its course and seemed to gain height, as if influenced by the sight of something else. Another dark bird appeared in my scope, about one mile out at sea. There was a silence among the three of us as we had all spotted it and were trying to work out what it was. Was it another skua? No, this was definitely a raptor species.

All of a sudden, I started getting excited as I took my guess that it was a Marsh Harrier, as I had seen one of these on a sea watch before. I could tell by the V-shaped wing-body angle and frequency of wingbeats that it certainly wasn’t a Buzzard. It was then suggested that this could be a Short-eared Owl, which then seemed the most likely possibility to me, as I had seen three Short-eared Owls come in off the sea from this exact spot over the last two years. Long-eared Owl was also a possibility.

We stayed on the bird for a good five minutes as it seemed to be heading straight for us, presumably having just travelled straight from the west coast of Denmark. As it came closer, more and more plausible guesses came through, such as Honey-buzzard, as there had been many records the previous day along the east coast of England. George was the first to spot that it had a ring-tail – indicating that this was indeed a harrier species. Now we had the options of Hen Harrier, Montagu’s Harrier, or the much rarer Pallid Harrier. ‘It couldn’t be a Pallid could it? Imagine if it was a Pallid!’ I suggested jokingly, or rather not jokingly, as I was getting more and more nervous with the mystery raptor approaching the coast. ‘Here we go…’

The three of us frantically tried to get as much footage of the bird through our scopes as possible; although, the nerves got the better of me as the colour and plumage of the bird became visible, and I gawped in awe. ‘Count the fingers!’ I remember repeating deliriously over and over.

‘I think it’s got four fingers, you know!’ George shouted in disbelief. ‘It’s orange! It’s bright orange!’ George and Dan were exclaiming. I remember seeing the bird through my scope and seeing the clean orange underparts and the bold facial markings, comprising of the complete collar and bright white spot above the bill. The tail was remarkably long and narrow. Fortunately, I had seen juvenile Pallid Harrier in the UK before – the bird quartering fields at Bank End, Lancashire in September 2018 – so the ‘jizz’ of the bird seemed indeed familiar. The three of us were all on the same page, as it finally flew straight over our heads, interacting with a flock of Starlings, and made its way inland. We all stared at each other in disbelief. George was frustrated as this was the sole day that he decided not to bring his camera, and he would have managed to get ‘frame-filling’ shots, as he put it.

But it soon became clear as we reviewed screengrabs from George’s footage and Dan confirmed the ID features that we had indeed just encountered a Pallid Harrier. That feeling is a tough one to describe, as it is a complex mix of excitement and pride, but also anxiety and adrenaline. Perhaps ‘euphoria’ is the closest word I can find to describe it. Now, I would finally understand what birders mean when they say that their hands were shaking uncontrollably…

We ran to the adjacent airfield, as this is where raptors have tended to go in the past when they have arrived from over the sea. The first thing I needed to do was get the news out. I got straight on to the Fife Bird News WhatsApp group and put that we had just had a ringtail harrier, possibly Pallid, in off the sea at Kilminning. George sent an over-exposed screengrab of the harrier in flight and asked for confirmation that this was Pallid – to which a stream of replies from experienced birders, including SOC stalwarts Will Creswell and Ken Shaw, confirmed our suspicions! A very sobering message came from John Nadin that this was mainland Fife’s first ever record of Pallid Harrier (the Isle of May claimed the first Fife record in 2015), and I still remember reading this fact out to George and Dan and seeing their jaws drop in synchrony.

The three of us were immersed in our phones, responding to messages from the chat and looking at our pictures and videos, when I decided to look up and see if the bird had reappeared over the airfield. Suddenly, I saw the bird heading along the fence line, heading straight for us – I shouted ‘LOOK! It’s here again!’ and the bird came within 10 metres of us before doubling back on itself and heading back out over the airfield, showing off its bright orange undercarriage and wing pattern to us. A flurry of expletives followed.

The bird made a beeline diagonally across the airfield, heading west. I saw the bird very distantly, a glowing orange beacon in the midday sun, but unfortunately it was lost from view, and this would be the last that was seen of the bird.

It was frustrating that the bird didn’t stay for others, especially for local birders who work this patch so hard for moments just like the one we had experienced – I almost felt quite guilty – but it was very much a case of right place, right time for us. Having said this, without George’s calm composure to be able to get such an important record shot which confirmed the bird’s identity (and we expect the record to be accepted by the BBRC), this bird might have slipped through the net. A life tick for both George and Dan, and an exceptional find for all three of us, this would indeed be a moment to remember in all our birding careers. We revelled in our Twitter glory as we announced that we had just found a Pallid harrier on a sea watch in Scotland – not something very many birders can say.