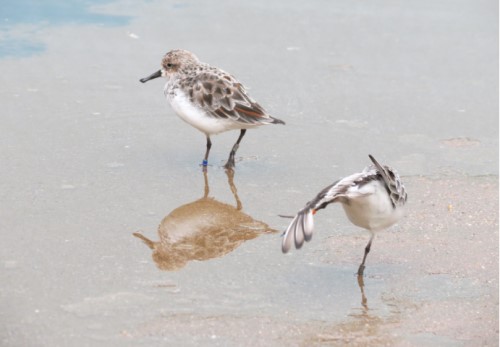 Thank you to everyone who attended the fascinating talk given by Nigel Clark, as part of this year’s mini SOC Annual Conference, held virtually.

People started getting worried about the decline of the Spoon-billed Sandpiper in the early 2000s and Nigel got involved in SBS conservation in 2008. Since that time, there has been a massive upsurge in the interest in the species, which has led to many people and organisations coming together to try and turn its fortunes around.

Nigel’s talk highlighted some of the work that has been done to identify the causes of the decline and the steps that have been taken to reverse it. Many of these actions have resulted in improvements in the lives of local people at the same time as reducing some of the causes of the declines. The conservation project has had many high points, but some low points as well and the talk concluded with the challenges that remain and the prospects for the future.

Please click below to watch this short heart-warming animation of the plight of the Spoon-billed Sandpiper and to hear about the schoolchildren who got involved in the project.

Nigel has always been interested in birds and while at university got involved with the Wash Wader Ringing Group and is still an active member. He undertook his PhD at Edinburgh University on the ecology of Dunlin before moving to the BTO to initially work on the effects of tidal power on estuarine birds. He then spent the next 30 years at the Trust, much of it as Head of Projects while always maintaining his passion for waders. In 2008, Nigel became involved with those trying to save the Spoon-billed Sandpiper and is the scientific advisor to the Spoon-billed Sandpiper Task Force. Now retired, he has more time to concentrate on the battle to save this threatened species.