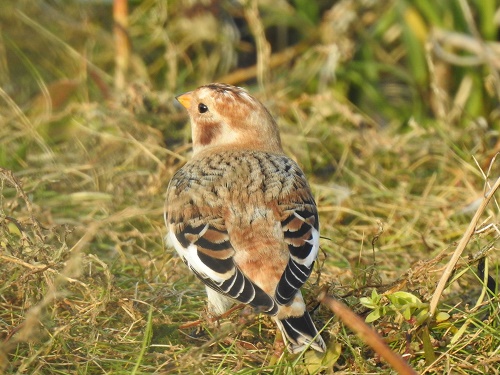 Though there is a small population of Snow Bunting breeding in the Cairngorms (which can most easily be seen at the ski-lift car park), for most people, their chance to see Snow Bunting is in the winter months - now is a great time! The birds arrived in to Britain in September/October from more northerly breeding areas to spend the winter here.

Snow Bunting are most readily found in open habitats along the coast, such as salt marshes, short-grass/pasture, dune slacks and sandy beaches where they forage among seaweed and piles of vegetation for food.

The largest flocks of Snow Bunting can be found in open coastal areas of the Northern and Western Isles, where 100 or more can occur together. Elsewhere numbers tend to be smaller, with birds flighty, due to repeated disturbance by walkers and others.

In Lothian, good sites for seeing the birds include Musselburgh, Aberlady Bay, and the east coast (from John Muir Country Park to Torness). Flock sizes are generally small but may reach 100s in favoured localities.

At Aberlady, one of the prime areas to spot Snow Bunting is the small stretch of salt marsh and the golf course edge at Kilspindie Golf Club overflow car park and beyond, and on the reserve itself.

Approach slowly and cautiously (keep scanning ahead before moving forward) to avoid disturbance and check clumps of seaweed and vegetation and the vegetated edges of sandy beaches where birds are looking for seeds etc.

For further suggestions of sites where you might stand the chance of seeing Snow Bunting (or other birds), download the SOC's free app, Where to Watch Birds in Scotland and use the species search facility.