Species and subspecies: A checklist of the birds of Scotland

In 1993 SOC Council delegated to The Scottish Birds Records Committee (SBRC) responsibility for maintaining the Scottish List (a list of all species and subspecies of wild birds recorded in Scotland). In turn, SBRC appointed a subcommittee to carry out this function.

The Scottish List is a statement of the status of those species and subspecies known to have occurred in Scotland and its coastal waters.

The Scottish List Recording Area follows the EU Fishery Limits as they apply to Scotland. These extend to 200 nautical miles (370 km) from the baseline surrounding Scotland's coast and its outlying islands, or the median line between Scotland and neighbouring countries, whichever is the nearest. 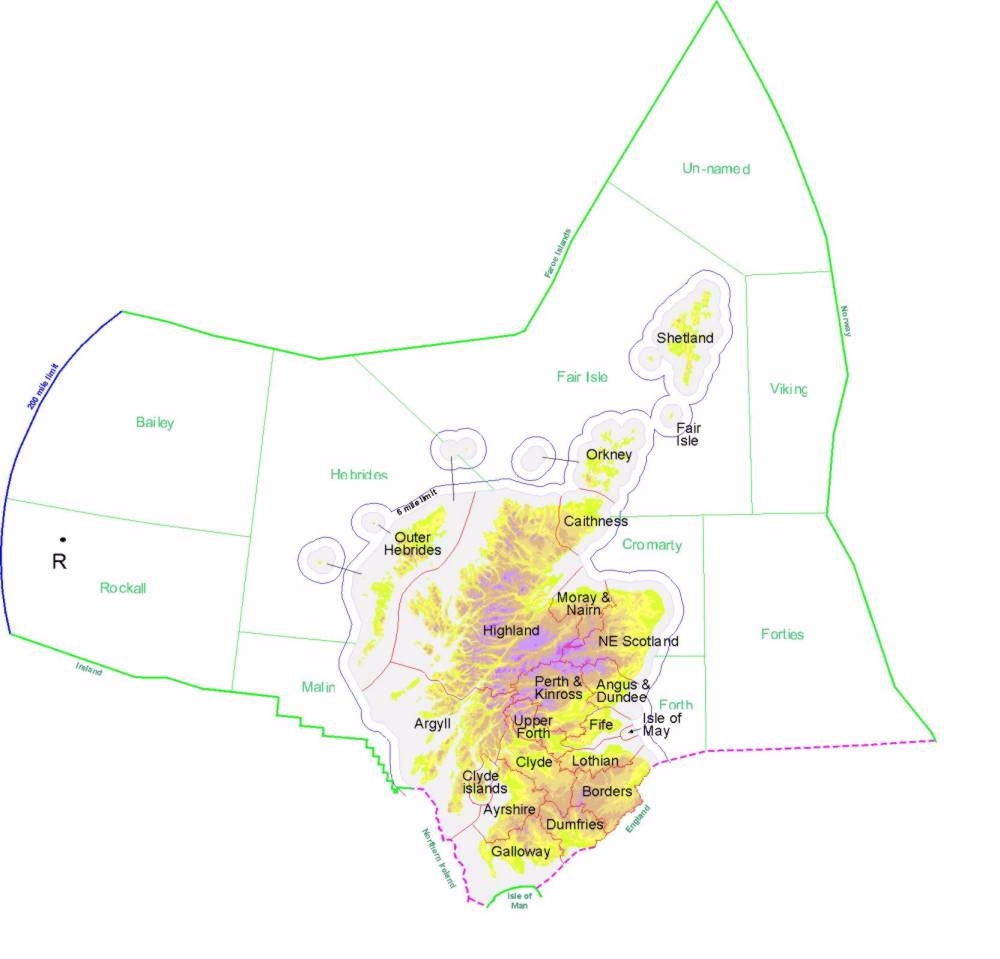 The map shows Scottish waters used for recording of 'at sea' records in relation to the Scottish List. The solid line marks the boundaries of the coastal waters considered by the Scottish List Subcommittee for the purposes of the Scottish List. It follows the ~370 km (200 nautical miles) of the UK Exclusive Economic Zone Limit and the UK Offshore Marine Conservation (Natural Habitats, & c.) Regulations 2007 (UK Government 2007), except for boundaries with Northern Ireland which are instead defined in The Adjacent Waters Boundaries (Northern Ireland) Order 2002 (Marine Scotland 2017); and the territorial waters of ~22 km (12 nautical miles) around the Isle of Man. The named sea areas are shown with their boundaries indicated (R = Rockall). In reality the boundary is usually the median line between Scotland and neighbouring countries, with the 200 nautical mile limit only being reached to the west of Scotland (Bailey and Rockall), in the Atlantic Ocean. The 'at sea' limits are now revised to agree with BOU (2018).

In recent years there has been an increase in taxonomic activity, reflected in a period of instability. SBRC therefore established several principles for the original version of the Scottish List, which are still followed. The British Ornithologists' Union (BOU) has maintained the official British List since 1883 and SBRC adopts its taxonomy, sequence, and scientific and English names for the Scottish List. Similarly, species categorization follows BOU, and in no instance is a species or subspecies placed in a higher category on the Scottish List than it appears on the British List.

One of the advantages in basing the Scottish List on that used by BOU is that it is compiled in a consistent and scientific manner. A consequence of this approach is that conservation agencies can use the list, safe in the knowledge that a rigorous process was undertaken during its compilation. This may be especially important in advising on legal issues where status of an individual bird may be discussed in court. In 1998, BOU introduced a revised categorisation (British Birds 91:2-11), following consultations with the government's Joint Nature Conservation Committee (JNCC). The JNCC has adopted the British List for decisions concerning the status of birds in Britain in relation to the Wildlife and Countryside Act 1981. The changes included a new category (Category E) for escapes and a redefining of the previous categories (A-D). The SOC adopted the new categories for the Scottish List with effect from our 2000 Report (Scottish Birds 21: 1-5). Further small changes to the definitions of Categories C and D occurred in 2002 and to Category B in 2013.

In 2016 (Scottish Birds 36: 200), we reported that BOURC had disbanded its own Taxonomic Subcommittee and were reviewing global taxonomies with a view to adopting one system for all BOU activities including the British List. BOU subsequently announced that from 1 January 2018 they would adopt the International Ornithological Congress (IOC) World Bird List for all its taxonomic needs, including the British List. The British List: A Checklist of Birds of Britain (9th edition) using the new taxonomy, was published in January 2018 (BOU 2018), resulting in significant changes to the Scottish List.

The BOU website is continually updated and includes the British List, press releases and the most recent committee and taxonomic reports. The BOU's 9th Checklist provides much additional background information.

A – Species that have been recorded in an apparently natural state at least once since 1 January 1950.

B – Species that were recorded in an apparently natural state at least once between 1 January 1800 and 31 December 1949, but have not been recorded subsequently.

C – Species that although introduced now derive from the resulting self-sustaining populations. Category C has been further subdivided to differentiate between various groups of naturalised species:

D – Species that would otherwise appear in Category A, except that there is reasonable doubt that they have ever occurred in a natural state. Species placed only in Category D form no part of the Scottish List, and are not included in the species totals. Category D species are listed in Appendix 2.

E – Species that have been recorded as introductions, human-assisted transportees or escapees from captivity and whose breeding populations (if any) are thought not to be self-sustaining. Species in Category E that have bred in the wild in Scotland are designated as E*. Category E species form no part of the Scottish List (unless already included within Categories A, B or C).

A species is usually placed in only one category, but some are placed in multiple categories: for example those occurring in Category A that now also have naturalised populations (eg Red Kite).

The Scottish List comprises only those species in Categories A, B and C.

Species appearing in Category D, all of which have occurred in Scotland on less than an annual basis, are tabulated separately, without any further details on subspecies or status.

Abbreviated codes are provided for status of each subspecies on the list. We previously followed the codes used by BOU in The Status of Birds in Britain and Ireland 1971, which were also used in Checklist of Birds of Britain and Ireland 6th edition (BOU 1992), but BOU revised the status codes in the 7th edition (BOU 2006), which have now also been adopted for the Scottish List:

Some of these codes are only generalizations. For example, many forms listed as WM may occasionally be found in summer. With the introduction of three status codes for migrants (including that of vagrant) to replace the former two codes, for Scotland, these codes have been given 'approximate' definitions:

SM – Occurs less than annually, but there have been more than c.20 records

V – There are c.20 or fewer Scottish records.

Where species are monotypic, nothing is shown in the subspecies column. If a subspecies has an established English name, this is shown.

Subspecies endemic to Scotland are indicated in the status column.

APPENDIX 1: Species groups not included in the systematic list

Records for the following species groups cannot safely be identified to species level and thus do not form part of the species totals:

Category D does not form any part of the Scottish List and is included here for information only.