George Waterston (1911-80) was born in Edinburgh, a son of the long-established family firm of printers and stationers.

He developed a strong interest in ornithology while at school at Edinburgh Academy and founded the Inverleith Field Club on 6 November 1929 with five like-minded school-friends, including his cousins Gerard and Patrick Sandeman. That club appears to have lacked the focus desired by Waterston and four years later it spawned the Midlothian Ornithological Club (MOC), influenced by the success of the Oxford Ornithological Society. By that time, he had already established contacts with a few key personalities ‘whose influence and inspiration shaped his whole life … and kindled his love for and dedication to Fair Isle’ (Pennie 1980). 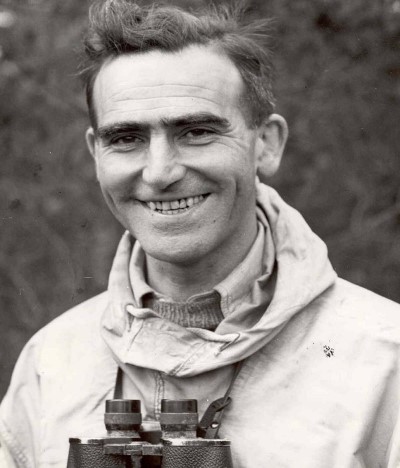 First among these was Surgeon Rear-Admiral John H Stenhouse who worked on the bird collection of the Royal Scottish Museum (RSM) (now part of National Museums Scotland), where George had been an enthusiastic visitor during his school-days (McGowan & Stenhouse 2010). Stenhouse, himself the successor to William Eagle Clarke’s studies at Fair Isle, saw George as the natural heir to this work. Closer to Edinburgh, E V Baxter and L J Rintoul’s protracted studies on the Isle of May drew to a close with their final visit in autumn 1933. The newly formed MOC was keen to maintain the work there, and Waterston and Frank Elder made an initial visit in 1932, making plans for an observatory. Influenced by Ronald Lockley’s work on Skokholm, Pembrokeshire and the success of his ‘Heligoland’ trap in 1933, Waterston, Elder, and E V Watson erected a similar trap on the Isle of May in October 1934, assisted by Lockley and W B Alexander and converted the coastguard hut into an observatory (Durman 1976). By staffing the observatory with relays of volunteers during migration periods, Waterston had developed the site as the first co-operatively run bird migration centre in Britain.

Waterston first visited Fair Isle in autumn 1935, accompanied by A G S Bryson. These were the only visitors to the island that year and the first ornithologists to meet up with George Stout and Jerome Wilson, the two resident island ‘ornithologists’ for six years (Williamson 1965). Annual visits were made until 1939, by which time Waterston had resolved that an observatory should be established, to complement the one on the Isle of May. During the Second World War Waterston was captured on Crete in 1941, spending 30 months as a prisoner-of-war in Germany where he dwelled on his observatory plans. During this time he also supplied personal bird observations to Erwin Stresemann who was preparing a paper on the ornithology of Crete, for which he was duly acknowledged (Stresemann 1943, Niemann, 2012). 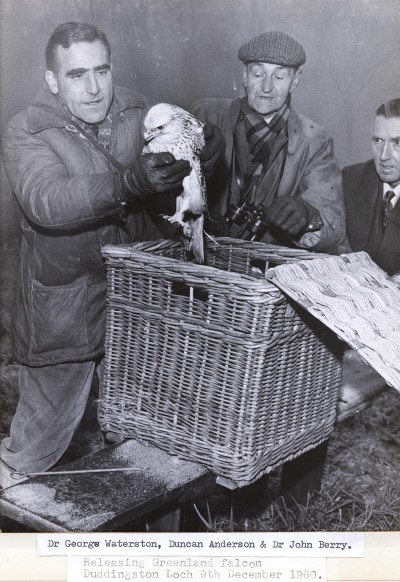 While a prisoner he developed kidney problems and was repatriated in an exchange of wounded officers in October 1943. As they were shipped back to Britain, by an odd coincidence that must have seemed prophetic to Waterston, the first land sighted was Sheep Craig, Fair Isle. In 1948, with assistance from Ian Pitman, he purchased Fair Isle and set up the observatory as a Trust, with financial assistance from the Pilgrim Trust and the Nature Conservancy, supplemented by subscriptions and donations; Arthur Bryce Duncan (later Sir) was appointed chairman and Waterston secretary, holding this post until his death. The old naval headquarters were developed as a hostel and laboratory by Kenneth and Esther Williamson. Six years later, the National Trust for Scotland (NTS) acquired the island to facilitate funding to aid the survival of the island community which was in decline, though the Fair Isle Bird Observatory Trust remained autonomous.

While still in his mid-twenties, Waterston was one of only a score of founding members of the SOC, organising jointly with E V Baxter a preliminary meeting in March 1936. He is considered instrumental in setting up the SOC, and at the inaugural meeting in January 1937, with Baxter and Rintoul appointed joint presidents, Waterston was elected Honorary Secretary, a post he held until his wife Irene took over in 1959.

In 1955 Waterston accepted the part-time post as Scottish officer of the Royal Society for the Protection of Birds (RSPB) complementing his part-time post as secretary of the SOC, initially at NTS offices, and later at Regent Terrace, Edinburgh. In 1959 he was appointed full-time Director of the RSPB in Scotland, remaining in post until his retirement in 1979. His RSPB tenure embraced a period that saw agreements on the Bass Rock (Lothian) and Handa (Sutherland) and the establishment of reserves in the Northern Isles, Balranald (North Uist), Loch Garten and Insh Marshes (both Badenoch & Strathspey), Vane Farm (Perth & Kinross) and Lochwinnoch (Clyde). At the core of this activity was Waterston’s determination to promote public engagement in conservation. This is perhaps epitomised by the decision to open public hides during the early years of the return of Osprey to Loch Garten, the resulting media coverage providing a strong public relations benefit. 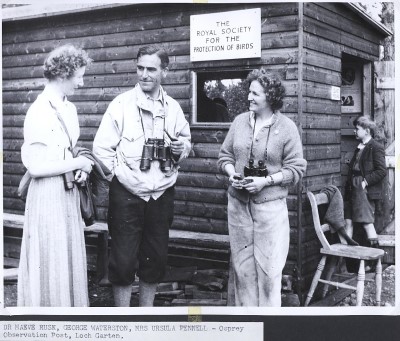 The SOC flourished in this period with Waterston the primary motivating force behind some landmarks in the Club’s history, for example the development of the library and the bird bookshop. During July 1966 the SOC organised a memorable tour of Scotland’s spectacular bird islands by the cruise ship Devonia. Almost 400 of the 900 passengers were delegates to the International Conference on Bird Preservation and the 14th International Ornithological Congress held before and after the cruise in Cambridge and Oxford. This was a huge undertaking by a relatively small organisation, but the commitment of the Waterstons and others ensured its success, helping significantly to raise the SOC’s international profile (Gordon 1966).

Waterston’s early links to the RSM through Stenhouse were later maintained through Dr Alastair Stephen, Keeper of Natural History from 1935 to 1958, who provided encouragement for the establishment of the Isle of May Observatory, the SOC and the Fair Isle Bird Observatory, of which he was a Trustee. Between 1936 and 1969 Waterston contributed a number of specimens to the RSM bird collections; one donation of 34 skins included ten collected on the Isle of May by Baxter and Rintoul.

He undertook no original research and had a modest publishing record. For example, he wrote the chapter on Northern Gannet in David Bannerman’s The Birds of the British Isles (1959), one of only a few species accounts not written by Bannerman himself, and he co-authored with Philip Brown The Return of the Osprey (1962).

Waterston was elected a Fellow of the Royal Society of Edinburgh in 1949; he was awarded an OBE in 1964 for services to British ornithology and conservation, and an honorary doctorate from the University of Dundee in 1974. He received the RSPB’s Gold Medal in 1972 and was a founding member of the Scottish Wildlife Trust. In her tribute to Waterston, Valerie Thom, when SOC President, obtained Council’s agreement for ‘some form of memorial’ for George Waterston as he was the ‘moving spirit behind so much of what the SOC is and does’ (Thom 1981).

When the SOC moved into its new purpose-built centre at Aberlady in autumn 2005, the building was officially named Waterston House in lasting tribute to his memory and work.